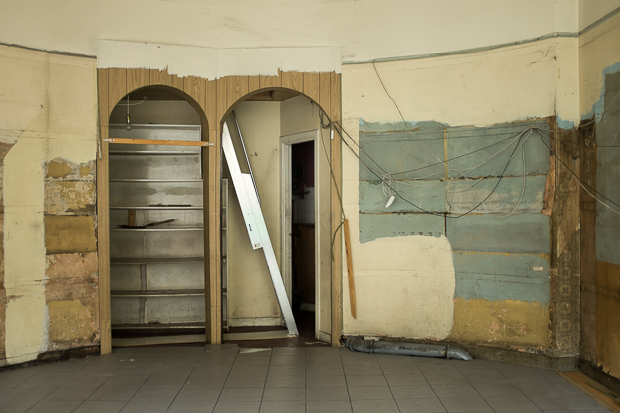 Starting in July 2014, the Empty Shop series came about more by chance than planning. Whilst walking my dog around Edinburgh, with a camera ever-ready, I started to see shops which had lain empty for some time, stripped of fittings and ready for let or sale. Desolate and unused and yet ripe with possibilities – each one holding a unique story about life, society and rebirth. There is however a real sadness to some of these images, melancholic overtones of failed businesses, unsuccessful companies and the reality of today’s economy. According to The Scotsman, “Almost 40 per cent of empty shops in Scotland have been vacant for more than three years”.

I’m fascinated by these places which are neither one thing nor another – liminal, they inhabit a temporary space between states. Once I started to notice these empty shops, I saw more and more of them on an almost daily basis. They are hidden in plain sight, overlooked and passed by; unused places waiting for a purpose.

The first space I really noticed was a vacant shop on George Street; a shell, whitewashed and illuminated by the sun – devoid of any colour and truly empty. Others appear to have been vacated in a hurry, whilst yet more are almost clinical in their appearance.

There is often a door or doorway leading into another room, which could suggest either the past or the future for the shop. They also remind me of minimal stage sets, devoid of actors, waiting for a character to make an entrance.

As the series has gone on, I’ve tried to refine exactly what should appear in it. I decided to exclude shops which were in the process of being let or sold, so it’s the spaces which are caught in limbo that I want to record: the ‘null’ spaces. In some cases, the shops have had temporary reprieves and have been used as Festival venues before reverting to empty spaces. But it’s the time when they just lie vacant that interests me.

I have not tried to be artful with the photographs – they are taken with a fixed lens camera pressed against the shop window and I enjoy those limitations as they let the space speak for itself. I’m not trying to impose anything on the space, I am simply recording a pause in the history of each location. There is a social and political dimension to the photograph, but it’s left for the viewer to interpret it.

Although some motifs occur across a few photographs – fire extinguishers, chairs and step ladders, the variety of textures, colours (or lack of), remnants and potential is fascinating. Some areas in Edinburgh clearly have more empty shops than others, but I have been surprised how much they are spread across the city. I’ve explored Tollcross, Newington, Morningside, Bruntsfield, Marchmont, the New Town and Stockbridge; my next forays will take me to Leith and Gorgie amongst others.

At the moment, the series has focused mainly on Edinburgh, but I would like to explore other towns and cities across Scotland, especially East Kilbride which “has the highest vacancy rate of all Scottish towns at 33 per cent”.

The complete series so far is at http://ken-gray.tumblr.com/tagged/empty-shop and a new portfolio site.