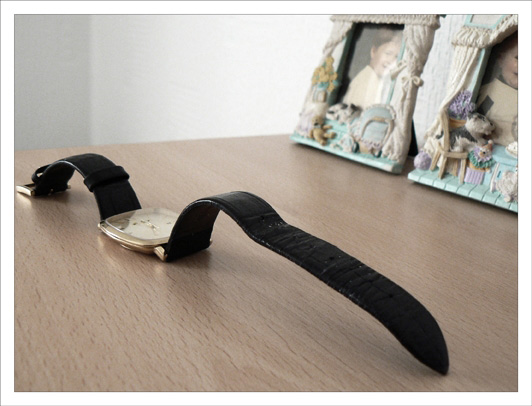 At a recent photography show opening in Street Level Gallery, Glasgow, I bumped into Donna Maria Kelly and she told me of her work photographing, as personal mementos, her father’s belongings in the hours after he had died. It was an interesting story and encouraging to hear that Donna, a recent photography course graduate, had subsequently been invited to show some of this work during a one day networking event, held to facilitate conversation about death, grief and bereavement. The event, ‘Life, Death, Grief Get-Together’, is on Tuesday November 19 in Edinburgh.

Donna kindly agreed to write up a little about it all to share the information.

All That Remains, by Donna Maria Kelly.

He suffered a massive myocardial infarction at the Golden Jubilee National Hospital, Clydebank.

I held his cold clammy hand while he slipped away.

Sadly I was the last person to see him alive.

That night I slept in his bed, and waking in the morning I decided to photograph some of his belongings.

A few snaps to preserve the way he had left things, that’s all, before they were disturbed.

I revisited these images in October as I prepared for a photographic exhibition with The Forgotten Collective. It was at this point I realised I had not truly grieved for my Da. As the eldest it was my role to be the ‘strong’ one in the family, to provide support my Ma and brother. My emotions were masked as I dealt with the practicalities of organising the funeral and the bureaucracy that follows the death of a loved one. My main priority was to console my Ma as she grieved for the loss of her husband.

I was empty, but these little snapshots of the mundane permitted reflection and allowed me to grieve for my Da.

Good Life, Good Death, Good Grief was established in 2011 by the Scottish Partnership for Palliative Care.

They provide a network of resources and ideas to help organisations and communities raise public awareness of ways of dealing with death, dying and bereavement.

The networking event ‘Life, Death, Grief Get-Together’ will be held at the Assembly Rooms, 54 George Street, Edinburgh on Tuesday November 19, 09:30 till 16:30.

The event will be an opportunity to share ideas on how to make Scotland a place where people can be open about death, dying and bereavement.

The day will provide delegates with the chance to connect, share experiences and reflect with a variety of people who are interested in openness about death, dying and bereavement.

1 thought on “All That Remains”