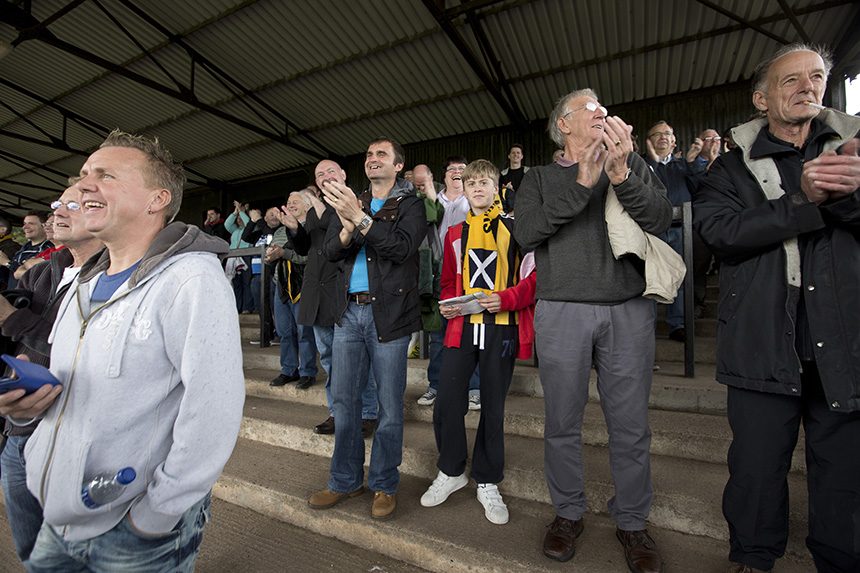 To most right-thinking people, all it involves is 22 men (or women) chasing an inflated leather sphere around a grassy field in a pointless physical activity of no consequence. To the rest of us it’s an obsession: football, otherwise known as our national sport.

I’ve been bewitched by the sport since my dad took me to my first match, as a 10-year-old in November 1974. I remember little of the game itself, other than Hibs defeated Morton 5-0 and it was raining and I ate a Wagon Wheel. Since that day I’ve attended hundreds of matches, mostly as a spectator but also many in a professional capacity, commissioned to photograph everything from top international fixtures, to obscure matches at n0n-League grounds in places which are little more than a dot on the map.

For the last decade, I’ve worked on a monthly basis for a football publication whose roots stretch back to the intoxicating days of the 1980s, when a generation of activists began self-publishing fanzines on every subject from music, UFOs, cinema, fashion and football. And so it was that When Saturday Comes (WSC) magazine began life in 1986. Over the past almost 30 years it has grown to become a much-loved and respected feature of the soccer season. With a mix of irreverent humour and critical analysis debunking much of the hype of the modern day football industry, it has seen an army of contributors commentating on the game from their own unique standpoint. Many writers have gone on to make careers in mainstream journalism and the alumni from the WSC academy includes top columnists, celebrities and even a former cabinet minister.

As the magazine grew and developed, photography was added to the monthly offering. Each edition now carries two features which rely on images to make them work: the eponymous Match of the Month and Shot! – an often wry look at life behind the scenes at football clubs across the UK and beyond. Now, the entire collection of photography shot principally by the magazines’ four regular photographers has been put together into an archive of historical and contemporary images, which is launched officially this week.

Each season WSC usually focuses on a number of stories from Scotland and it’s been me who is normally tasked with shooting features from my homeland. Most recent assignments have included the national team’s victory over the Republic of Ireland in a European Championship qualifying match at Celtic Park and a look at the duel identity of English-based Scottish League side Berwick Rangers, shot in the run up to the Independence referendum. Very different fixtures but a similar ethos and aesthetic when it comes to the approach and final edit of pictures.

Whether its shooting an international match or something from the lower leagues, the brief is always the same: to present images which reflect the supporters’ experience of the games they attend. And while the magazine may be headquartered in London, its regular coverage of Scottish football has ensured an enduring and loyal readership north of the border.

This weekend I will once again be covering a match in Scotland, at one of the country’s most iconic and traditional stadiums. To find out where he will be, however, you’ll have to purchase the next edition of WSC, due out in early-March.