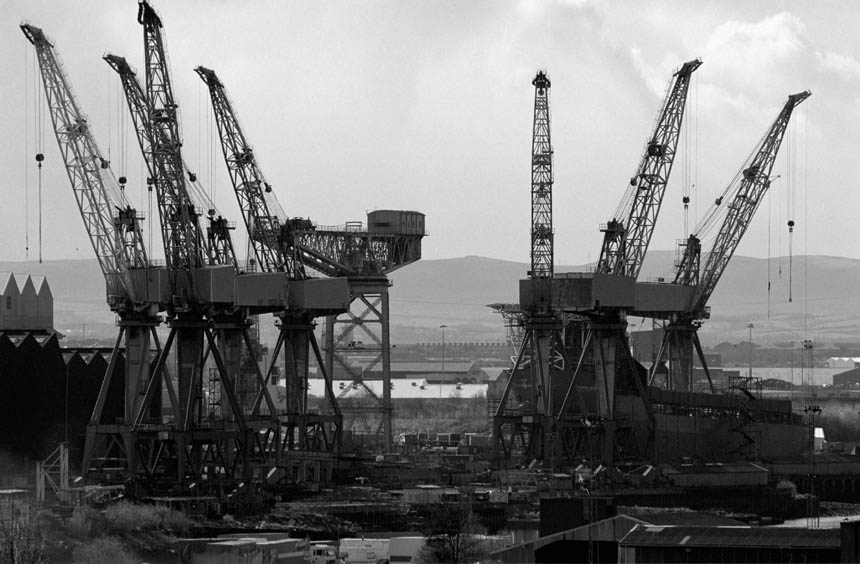 We’ve been here before! Seeing all the images this week in the media from the Govan shipyard in Glasgow, reminded me of the last time the yard was in crisis and under threat of closure and redundancies.

On 14th April 1999, I was dispatched along with reporter Jack O’Sullivan by the Independent to get over to the yard, as a major announcement by the then-owners Kvaerner was expected. Like all these types of assignments, the newspaper photographer is there very much as an intruder, illustrator or, at worst, an inconvenience. I always felt like a bit of all three.

The thing that struck me back then – and still amazes me when I look at contemporary images – is the sheer scale of the shipyard. Monolithic cranes, gigantic equipment, monumental structures. And towering out of the grey gloom that day, ships. Vast hulks, speckled with tiny dots, which I came to realise were people, working high on the scaffolding or towers.

The men, often casually dressed in their own clothes, jeans, jerseys, jackets, ignored the small gang of press photographers, reporters and television crews who weaved their way across the yard, trying to form impressions and frame the story. I don’t remember being made to feel welcome, but equally, the reception we got was not hostile. Weary resignation to fate? Maybe, or possibly they were used to it by then.

It is, of course, impossible to form an impression of what life was really like at the yard. In those pre-digital days, time on an assignment for the next day’s newspaper was even tighter that it is today. It was a case of making an image which could convey a sense of the story. At that point no-one knew what the outcome would be. In the end, it was a happy one, of sorts. BAE Systems bought the shipyard and on the back of Royal Navy orders has continued to make vessels.

As I headed off to file my photographs to the Independent, I knew that this was just a chapter in the long, slow and painful decline of Scotland’s heavy industries. I am just content that I was able to see a small snapshot of the story before moving on to the next assignment.

Colin McPherson photographed news stories, sport and features in Scotland for the Independent and Independent on Sunday from 1995 until he moved to England in 2004. He still works for both papers, which have been redesigned and relaunched today.