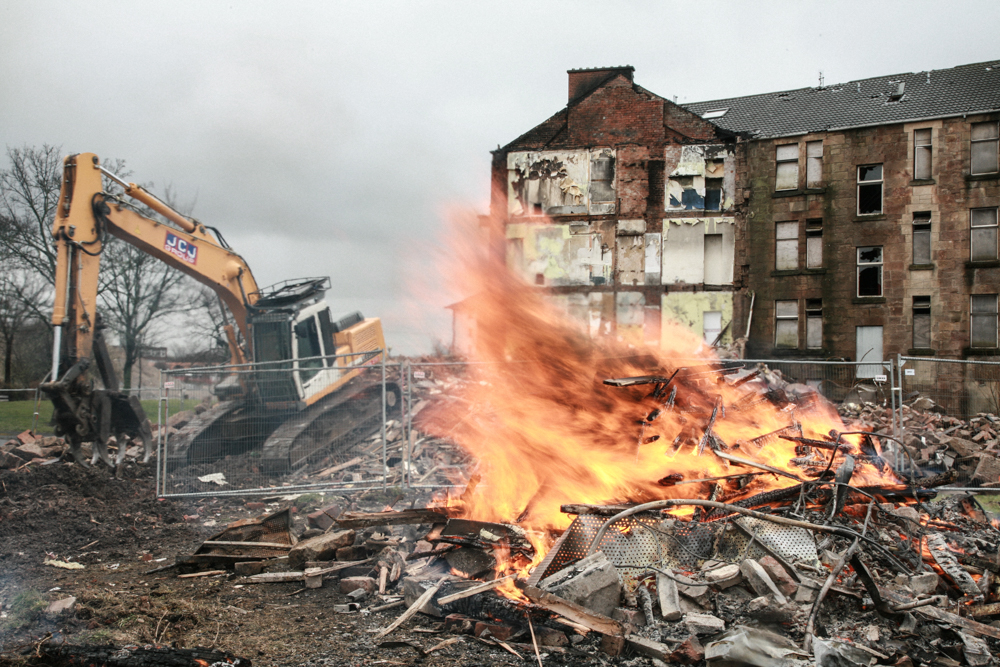 The “Games” and Dalmarnock, by Chris Leslie

Three cheers for the Commonwealth Games. The metal stick aka “the Queen’s Baton” which she kindly loaned-out for a series of global jogs has traversed the old pink section of the global atlas and has now entered Glaswegian orbit after a dash across Scotia’s hills, glens and shopping centres.

I remember the 1974 Games in Edinburgh vaguely but can’t remember it being such a big deal as today, so what has changed? Well “regeneration” is now deemed to be the prime reason for this sporting colossus. No more, a chance to find out who is the best lawn bowler in the firmament, this Commonwealth Games is being used as a “once in a lifetime” opportunity to “regenerate” an old and chronically poor section of the Dear Green Place, the Eastend.

Olympic cities like Barcelona, Beijing, and London have all used global sporting spectacles to revamp/re-imagine/re-brand parts of the city that were deemed blighted and un-loved. Glasgow has done likewise and so on Wednesday the tv cameras will be sweeping along new boulevards and over shiny metallic sports complexes where once was a mixture of council estates and spare ground. The community of Dalmarnock has borne the brunt of this disruption or regeneration, depending on how you see it, and photographer, Chris Leslie has documented the upheaval and the bitterness that has resulted from this massive change in the fabric of this part of Glasgow. We caught up with Chris recently to find out why he was compelled to shoot this project.

Ardenlea St – March 2008. A section of the abandoned flats are set on fire by vandals and are then demolished by the council. Margaret Jaconelli is living next door at the time as the only tenant in the street.

Why did you decide to feature this side of the Games?

I was studying an MA in Documentary Photography at the time and I had to do a final project over 2 years to submit as part of my MA and at that time I was living in the in Bridgeton, next door to Dalmarnock so when the commonwealth games announcement was made it seemed the perfect project to document and it was a chance for me to finally get round to documenting my home city.

What did you know of Dalmarnock before? What surprised you of the area?

Despite living round the corner literally, I knew nothing of Dalmarnock, and to be honest no-one in Glasgow knew anything either. I spent the first few weeks wandering around photographing the empty landscapes – but there was in many ways nothing to photograph! The place was empty but there was a buzz in the air that something, everything was going to change – so I persevered and kept wandering and researching.

March 2011 – Margaret Jaconelli and her husband Jack barricade themselves in their home awaiting the sheriff’s officers to evict them. For three days their home is besieged by local press and TV

How were you received by community members?

The first person I actually met and spoke to was Margaret Jaconelli. I didn’t even notice her at first as I was photographing the empty and partially destroyed Ardenlea St. I heard a wee voice shout hello and when I looked again I see this wifie hanging out her window. I chatted with her on the street for over 2 hours and she told me her story and her pending fight against eviction. I went on to document Margaret’s story for over 3 years as she was finally forcibly evicted from her flat in March 2011.

As well as Margaret I also photographed and interviewed some of the Dalmarnock youth and spent some time in the community centre with the pensioners. The youth were happy with the chance of work, lots of apprenticeships were being offered – although no-one at any stage seemed to be offering them the chance to be managers or engineers – it was as if there was a certain level of expectation placed upon them and the area. The elderly population was just glad that after 30 years of decline that something was finally going to change, but they continually reminisced about the good old days when Dalmarnock was once a thriving community.

March 2011 – After a four hour siege and enforced eviction by around 100 police and sheriff officers, Margaret and her husband Jack are finally evicted from their home.

How is Dalmarnock’s future looking? Will you continue to photograph there after the Games?

After 30 years of post industrial decline, poverty, depopulation and general misery Dalmarnock is of course looking reborn with the athletes village and sports arena’s and so on. But you could have plonked a brand new shiny Tesco’s in the middle of Dalmarnock and that would have welcomed with open arms because the area was in such a state for years.

It would be good to go back and revisit some people post Commonwealth Games to see what has changed for them. A before and after set up of the built environment would be good also, but a real headache to work out as old Dalmarnock doesn’t exist anymore, even the roads have changed. For now there is a lot of speculation and complaints about the security fencing around the area, but that for me is not a big story because if you look around, most of Glasgow is in lock down it seems for the games and these fences and restrictions will be gone in a matter of weeks.

But for me what will be more interesting is looking longer term at the proposed legacy of the games, and to see if anything has actually benefitted the local population as surely that would be the whole point of transforming one of the poorest and neglected areas in the country?

April 2008 – Dalmarnock lad – Tony stands amongst the rubble of the demolished high rise flats in Dalmarnock. He offers me a piece of priceless ‘Dalmarnock Rock’ as a souvenir as the land in the area begins to be sold off and cleared to make way for the games.

The community of Dalmarnock prior to the development of the sites for the Commonwealth Games in Glasgow in 2014.  Much of these areas have now completely disappeared over the past few years – 2008 to 2011

Margaret Jaconelli fought a long battle against eviction from her home in Ardenlea St, Dalmarnock. Here flat sat on the site for the Athletes Village for the Commonwealth Games is to be built in Glasgow.

August 2012 – The last remnants of ‘Old Dalmarnock’ are demolished