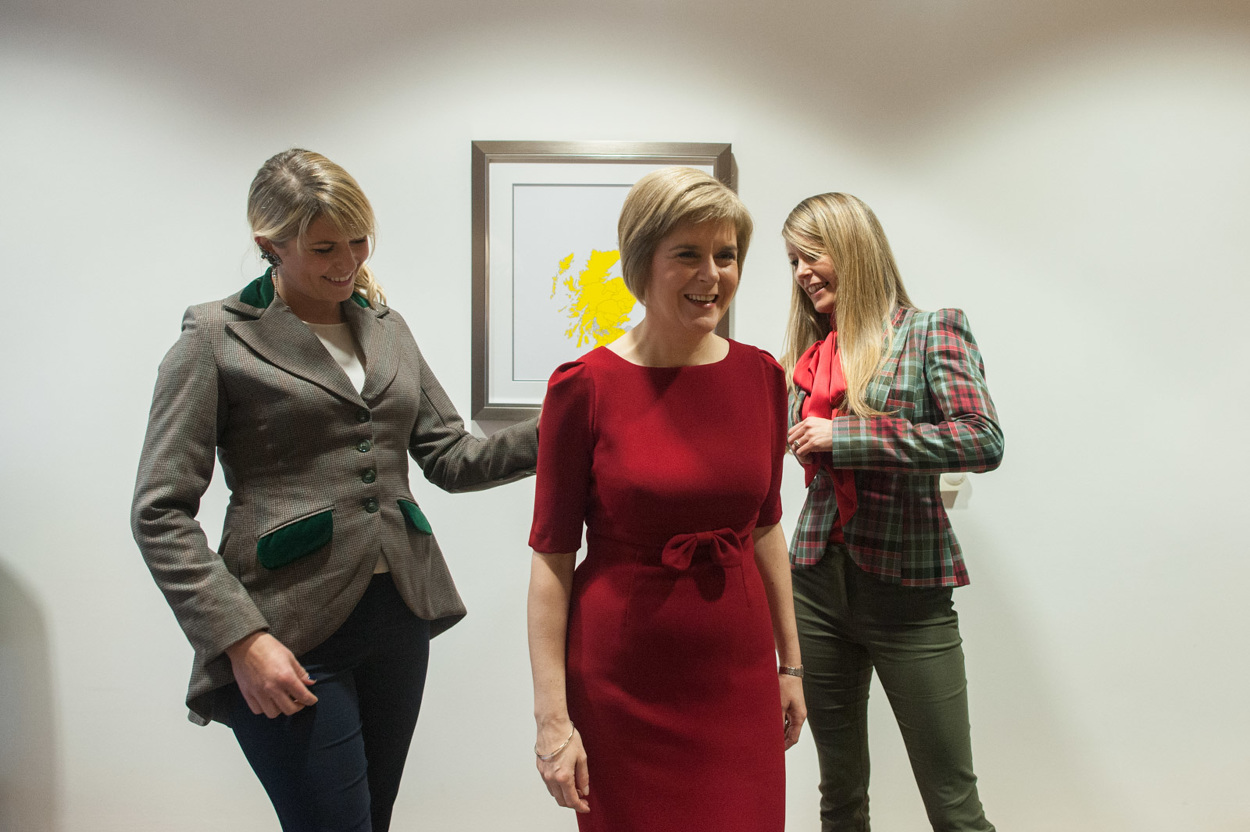 As the 2015 UK General Election campaign gathers pace, we are being bombarded by soundbites and overwhelmed by statistics whilst politicians appear on every television screen, newspaper and website we look at. There’s no getting away from politics, for the next couple of months, at least.

So we at Document Scotland are going to add to mix by showcasing work by Glasgow-based photographer Peter McNally, who has been granted unprecedented access to photograph one of the pivotal figures in the current contest for votes: Scottish National Party (SNP) leader and First Minister Nicola Sturgeon.

The story starts during the Independence referendum campaign, when Peter was one of a small team of dedicated photographers working on behalf of the National Collective to document its campaigning activities as it sought to persuade Scots to vote Yes. Through this, Peter was able to make a visual record of the campaign, and in so doing, got close to the people making the news. Little did he know at the time, but his work was being noticed by the leaders of Yes Scotland and the SNP.

In the dramatic aftermath of the 18th September 2014 vote, Alex Salmond resigned and his then deputy, Nicola Sturgeon was elevated to the position of First Minister. This followed on directly from a nationwide tour which the party undertook, with Sturgeon speaking at packed venues and the party’s annual conference. By this time, Peter had already been contacted and offered the opportunity to photograph behind-the-scenes. It was a chance he grabbed gladly. As Peter explained: “The SNP tour was a first of its kind in Scottish and British politics and saw Nicola visit Edinburgh, Dumfries, Dundee, Inverness, Glasgow and Aberdeen whilst engaging directly with the public with a talk then an open question-and-answer session.” Shortly into the assignment Nicola Sturgeon became the SNP party leader at the party’s National Conference in Perth then soon after that, Scotland’s first female First Minister. Peter was on hand to capture it all.

In terms of creating an archive of images from an historic moment, the SNP saw the value of what they were proposing through Peter’s work. As Peter noted: “The SNP team were interested in developing both an in-house style of photography they could have as a go-to resource and also a historic documentation that would act as a public record.” But there’s realpolitik involved too, according to Peter: “The project also fits in well with Nicola’s own vision of a more accessible and transparent governance.”

Peter’s work is set to continue and is being updated continually on the internet, as he explained: “Right now we are focusing on documenting campaign events in the run up to the General Election in May. My own vision is to not only tell the story that is front and centre but to try and capture moments behind the scenes. I hope this will make for a more complete and hopefully interesting look at this one section of Scottish politics. Currently it’s been so busy with the General Election campaign that we haven’t really had time to discuss how the project might progress. There have been informal discussion about documenting more in depth on a day-to-day basis and even setting up a dedicated team to deal with editing and archiving. As it’s an SNP project I am funded by them but the parliament have their own photographers so there may be a need to work more closely with them in the future.”

As Peter concludes: “We are also in the process of organising an archive on Flickr. There are lots of idea out there. I think after the General Election we will be able sit down and see how we would like to progress. There are also opportunities for exhibiting and publishing a photo book, something I am keen to work on. For now though, I’ll keep shooting and try to keep it interesting for people.”