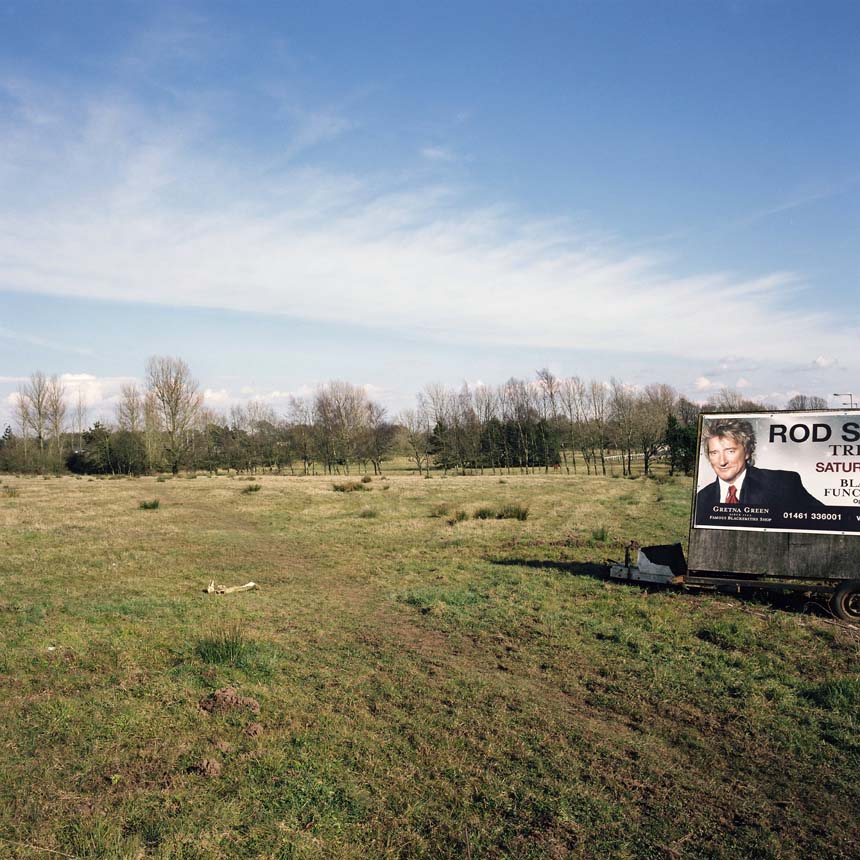 Break for the Border….Colin McPherson

As the old maxim in publishing goes, celebrity sells.

So I was delighted to encounter Rod Stewart on a scrubby patch of land, a few short yards inside Scotland. Not the real McCoy, of course, but an invocation to attend a musical tribute to the great Jockney singer at some nearby watering hole. An evening with Rod Stewart in Gretna? Perfect for the purposes of my project. Had it have been Elvis, Lady Gaga or, heaven forfend, Michael Bublé, then this particular picture simply wouldn’t have worked. It had to be someone whose personal identity is intwined between Scots and Cockney, fitfully patriotic, yet permanently absent. Step forward, Rod Stewart.

‘A Fine Line’ is, for me, not just about the physical border between Scotland and England, but an investigation of the criss-cross identity of people and places along the frontier. My exploration of the border is just that: a journey without an agenda, a series of chance encounters and found moments which build a mosaic of something bigger, more tangible.

There are many threads which run through the work, one of the primary strands being humour. Subtle, dark, subconscious, playful or blatant, I am constantly looking for instances which juxtapose the serious with humorous. To laugh with, more than at, but to recognise the absurdity in much of what we see.

After taking the Rod Stewart photograph, I started to think of the cover of his new album, which pictures him, guitar-slung-over-back, sauntering away from the camera, carefully avoiding the waves lapping at his feet on some anonymous sandy beach. You might believe that the shot is taken at Malibu, St Tropez, Mozambique or some other glamourous location. But I reckon it might just be staged somewhere on the Solway, possibly a few miles from Gretna. And that leads me to believe that maybe the real Rod Stewart did appear to me in that forgotten field, sandwiched between the thundering M74, the Outlet Village and the border. In fact, I can almost hear him now: “If ya want my body and ya think I’m sexy….”

Colin’s photograph, and others from his series, “A Fine Line”, can be seen at Fotospace Gallery, Rothes Halls, Glenrothes, as part of the “Seeing Ourselves” exhibition, which is curated by Document Scotland. The exhibition continues until August 1st 2013.
Document Scotland’s latest newspaper, which accompanies the exhibition can be bought online. You know you want to.  https://new.documentscotland.com/seeing-ourselves-newspaper/