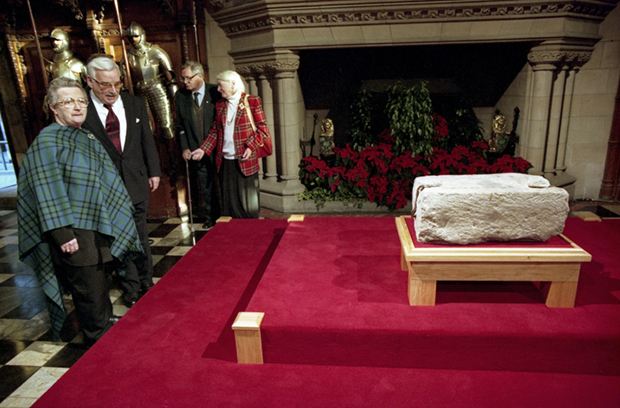 The Stone of Destiny

“On Twitter and the BBC this morning I read that Kay Matheson, one of the four students whom on Christmas Day 1950 liberated the Stone of Destiny from it’s position in Westminster Abbey, had passed away aged 84. The story of Kay Matheson,  and her three accomplices Ian Hamilton, Gavin Vernon and Alan Stuart, is infamous in Scottish politics and is one of many milestones on Scotland’s journey to the referendum on independence next September.

As far as I know there are no images from 1950 when Ms Matheson and her colleagues returned the Stone to Scotland, but when the Stone was eventually returned in 1996, from London to Edinburgh, the nation’s press watched. But as the Stone made it’s way from Albermarle Barracks in Ouston, to Coldstream, and right into Edinburgh Castle’s Great Hall perhaps no photographer had a better chance to witness the journey than Gary Doak, a freelance photographer working in Scotland, who was assigned to photograph the various stages of the historic journey…” -Jeremy Sutton-Hibbert.

The Return of The Stone of Destiny, by Gary Doak.

With the acquisition of a new scanner I recently decided to re-visit some old negatives. One event I was keen to review was the return of the Stone of Destiny to Scotland both because of its historical importance and as one of the milestones on the road to the vote for independence next year. I was also aware that I probably had the most comprehensive coverage of the event of any photographer.

In 1996 I was mainly freelancing for newspapers and a fair slice of my work was commissioned by Scotland on Sunday. I was initially sent to cover the first leg of the Stone’s journey from the North of England to Scotland on the 15th of November. This involved an early start to catch it leaving Albemarle Barracks in Ouston, near Newcastle. There was no ceremony to speak of and I had no access to the barracks, and I was the only representative of the press there. I just had to wait by the main gate and grab what I could as it left in plain reguluation Army Landrover. Then I had to make a mad dash back up the road to get to Coldstream to await its arrival.

What a contrast I found when I arrived in Coldstream: the place was heaving! The streets were lined with people from the bridge to the town. Press everywhere: photographers, journalists and tv crews. Just getting a vantage point would be a task in itself. There was definitely an air of expectation and a sense of celebration in the town. I had a good view of it crossing the bridge into Scotland – you had to get that shot.

Two weeks later it would make the final trip to Edinburgh Castle on St. Andrews Day. I was tasked with covering the event along with a few other photographers for Scotland on Sunday. I had an initial position on the Royal Mile (on top of the arch entrance of the City Chambers) and followed its progress up through the crowds to St. Giles Cathedral. Again there was a huge turnout, this was a significant event without a doubt.

I then had to make my way up to the castle, grabbing a shot of it traversing the esplanade, before making my way up to The Great Hall for the official handover. And this is where I was fortunate to have the trust of my picture editor, Alex Aikman, because she could easily have sent one of her staff photographers to cover what was probably the most important part of the day. There was a pool of just three photographers; me, PA and Reuters.

This was it. The pomp and ceremony with the great and the good. A hush falls over the room. The Secretary for State for Scotland, Michael Forsyth steps forward. The Queen’s letter is read aloud. Prince Andrew steps up. They pose for another picture. And that’s it, everyone files out and there, left on a little plinth on some red carpet, is the Stone. Back where it belongs. Until it’s needed for the next coronation, of course, because if you read the t&c’s in the Queen’s letter you’ll see that we’re only looking after it.

Once the official party has left, some other interested parties arrive. Alex Salmond has brought a couple of visitors, including Kay Matheson who, on Christmas Day 1950, along with three fellow students, removed the Stone from Westminster Abbey and spirited it away under the cover of darkness back to Scotland. That was its first, if unofficial, return to its homeland. But that’s another story…

More on the story of Kay Matheson and the Stone of Destiny can be read here. Kay Matheson passed away on Saturday at the age of 84.

All images and text are ©Gary Doak, 2013, all rights reserved. You can see Gary Doak’s photography website here, and send him a note on his Gary Doak Photography Facebook page here.