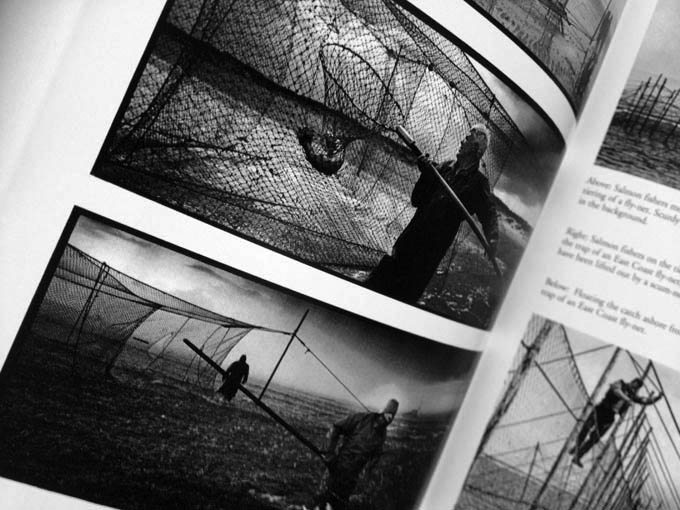 Although it has been a number of years since Document Scotland’s Colin McPherson produced the main body of work in his Catching the Tide series, the photographs of his long-term project documenting the lives of Scotland’s remaining salmon net fishermen continue to be published.

A new book entitled The Salmon Fishers – a history of the Scottish coastal salmon fisheries by Iain A. Robertson features 14 monochrome images taken from the series. The book is a detailed summary of the history of the ancient tradition of using nets to catch salmon and sea trout for the commercial market and recalls the many twists and turns the industry has had to negotiate to survive into the 21st century. It talks of the lives of the fishermen but also of the bureaucracy and parliamentary strictures which have reduced a once-thriving industry to near-invisibility in many parts of the country.

Colin’s work with the fishermen began in the mid-1990s when the fisheries were still principally owned and managed by great companies which had exploited the salmon for over a century. Firms such as Joseph Johnston & Sons owned the leases to many profitable netting stations and employed hundreds of men. With dwindling fish stocks, the flooding of the market by cheaply-produced farmed salmon and an aggressive buy-out campaign by angling interests, the days of salmon netting seemed numbered. It was this which spurred Colin on to making as complete a record as possible of salmon netting which has lead to many years travelling and photographing the fishermen and their stations from the Solway in the south to the north west tip of Scotland in Sutherland. Companies such as Johnstons are long gone, but the record of their fisheries is in part preserved by Colin’s work.

If Santa brings you a fist full of book tokens at Christmas, what better way to invest them than by ordering a copy of The Salmon Fishers and reading up on a previously ignored part of Scotland’s rural history and tradition?