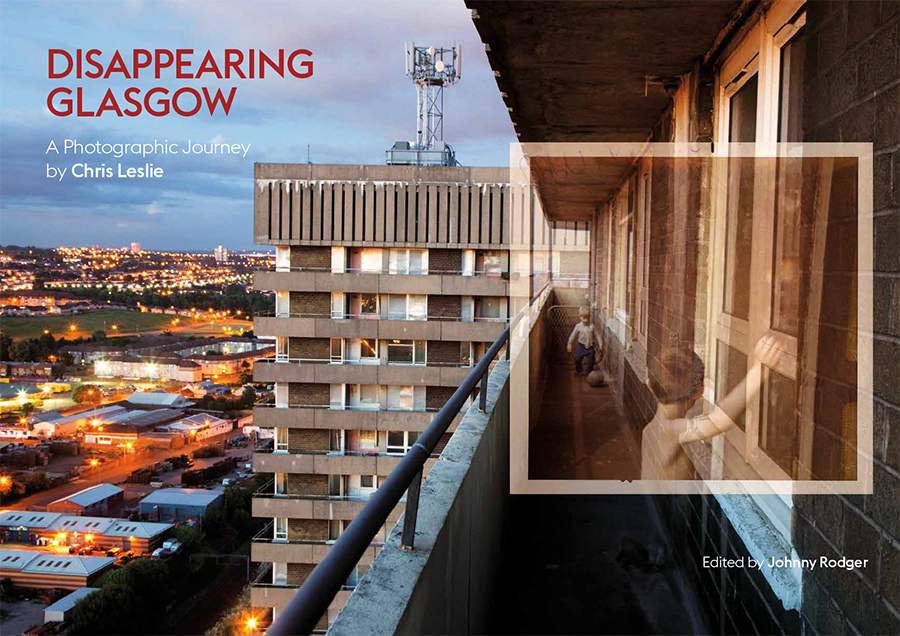 We’re delighted to read that Chris Leslie‘s Disappearing Glasgow project is getting another outing, this time as a multimedia exhibition at Glasgow Lighthouse space. If you missed Chris’s recent Glasgow School of Art show, then you should hurry along to see this arrangement of the works…

Photographer and filmmaker Chris Leslie is widely acknowledged as the most consistent chronicler of the city’s recent history. This new multimedia exhibition and accompanying book ‘Disappearing Glasgow’ documents an era of spectacular change in Glasgow through the medium of photography and film.

The skyline of Glasgow has been radically transformed as high rise tower blocks have been blown down and bulldozed. Since 2006 more than 30% of the city’s high rise flats have disappeared, communities dispersed across the city and Dalmarnock have ‘been raised from the ashes’ via the Commonwealth Games.

Does this Disappearing Glasgow herald a renaissance in the city?

Reviews of the book:

‘There’s something about a still image of something gone wrong that’s truly haunting. Perhaps to do with the age we live in, where everything is fast-moving and fleeting, that something grounded can have such a lasting effect. That’s what Chris Leslie brings to the table in Disappearing Glasgow. FIVE STARS’ The Skinny

‘Photographer Chris Leslie documents this decline and fall wth steely-eyed honesty and unsentimental empathy. The result is both distressing and beautiful, an essay in what might have been and a lesson for anyone involved in the planning process.’ Scottish Review of Books

‘The photographs are absolutely stunning, perfectly capturing the spooky, eerie atmosphere of buildings which have been left to time. The story which Leslie tells through his photo series involves the smallest detail, such as a lost lottery ticket or an old thermostat on the wall, but also panoramas of the Glasgow cityscape, being once someone’s view. Two thumbs up for this book!’ SkyHighCity

‘Chris Leslie is the foremost chronicler of the changing face of Glasgow over the last decade.’ A Thousand Flowers

‘Chris Leslie builds on that erudite pointed critical observation and legacy of photography from the Victorian photographer Thomas Annan, through to Marzaroli. The city is fortunate to have such a critical friend, the contemporary conscience of our generation, able to aim his lens with astonishing focus, at the same time capturing the beauty, sadness and poignant with a pointed dignity.’ Page and Park Architects

Book can be purchased at usual outlets or online here – http://www.freightbooks.co.uk/disappearing-glasgow.html