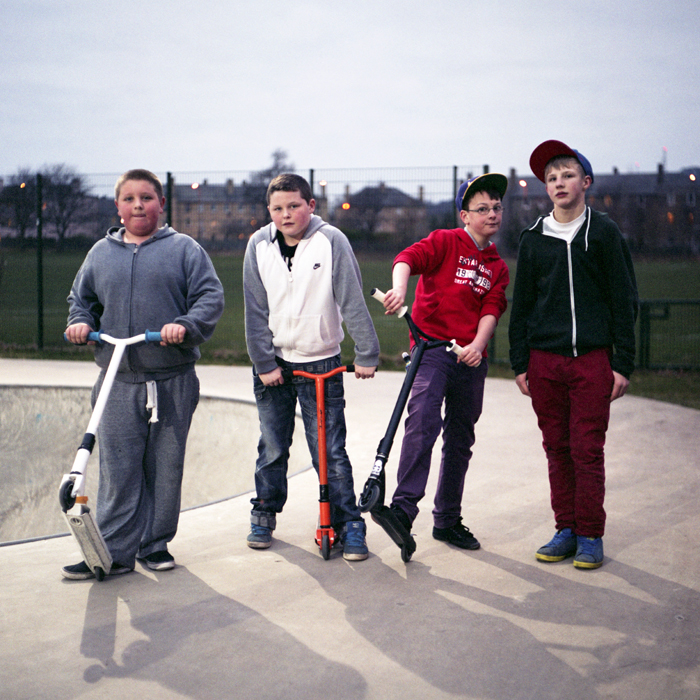 Face to Face: The Photographers

So folks, we are now very excited to confirm the following details about the work being presented at our event Face To Face: The Portrait In Photography Today at The Scottish National Portrait Gallery on the 14th May 2014.

Colin McPherson will present a short multimedia entitled ‘In the Company of Strangers’ in which he will explore the relationship between the photographer and the subject involved in making portraits. The photographs will reflect encounters Colin has had with people he had previously never met, and examine what happened next.

Jeremy Sutton-Hibbert will present work from his project ‘Satra, the Roma of Sintesti’ which spanned 17 years. Through repeated visits to the Roma camp in Romania, relationships were built, friendships formed and a portrait of a camp captured in both black-and-white and colour, charting the changes in the lives of the people.

Sophie Gerrard will present portraits from her personal and on-going series ‘Homecoming‘, a project focused on the experience of turning the camera towards the places, people and communities which evoke a particular sense of home. Shot all over Scotland, Sophie will talk about the notion of returning home, and share her experience of photographing those people and places which can feel simultaneously familiar and unknown.

‘American Always, Scottish Forever’, is a series of portraits Stephen McLaren has been making of Americans with Scottish ancestry who retain close affinity with the ‘Old Country’. Stephen discovered the subjects at the many Scottish Festivals and Highland Games that take place throughout California and even through they may never set foot in Scotland, all revel in having a Scottish identity to call their own.

Emily Macinnes will be showing her current, long-term project ‘Paradise Lost: Testimonies of Abuse‘ documenting male survivors of childhood, sexual abuse. Emily will show images from the portrait series and discuss how she approached this sensitive subject matter.

Emily Macinnes (b. 1989) is a Scottish-born photographer currently based in Edinburgh.  Since graduating from Nottingham Trent University in 2012 she has been working as a freelance documentary photographer and multimedia storyteller working with international NGO’s as well as more intimate stories of struggles faced closer to home.  What unites her work is a common interest in peoples’ stories and a desire to creatively communicate the individual and emotional aspect of the issues she documents.

The multimedia presentation of Graham MacIndoe‘s  self portrait series ‘My Addiction, Through My Eyes’ will show a selection of images from a much larger body of work. Although often harrowing, the images show the quietness and isolation that often comes with the obsessive nature of addiction when the partying days have long been left behind. Without glamorization or being sensationalist there is an awareness of pain and a quality of introspection rarely seen with this subject matter.

Graham MacIndoe studied painting at Edinburgh College of Art and went on to earn his master’s degree in photography at the Royal College of Art in London. He has lived in New York City since 1991 where he has been a part time  professor at Parsons The New School since 2011. He is having his first book published by LittleBigMan Books in June 2014 and is the recipient of a 2014 Alicia Patterson Fellowship. His work is in many public and private collections including Scotland’s National Portrait Gallery, the British Museum of Film and Television, the V&A Museum in London and the British Council. Graham is represented by Kopeikin Gallery in Los Angeles.

Arpita Shah will be presenting a short narrated slideshow entitled ‘Myth and The Asian Diaspora’. She will be discussing the relationship between mythology and portraiture in her work and how she uses it to explore the experience of Diaspora for Asians living in Scotland.

Arpita Shah is an India-born visual artist and is based in Scotland. With a background in photography and film, she predominantly works in these two mediums exploring themes around culture and identity. Her work tends to draw from Asian and Eastern mythology, using it both visually and conceptually to explore the issues of cultural displacement in the Asian Diaspora. Arpita has exhibited internationally and has been involved in several artist residencies and community arts project around Scotland, which include residencies at Street Level Photoworks, Ankur Arts and The Albert Drive Project.

Ben Roberts will be showing work from his series ‘Higher Lands’, photographed in 2007-08. The photographs, documenting adolescents growing up in the Highlands of Scotland, still resonate with people 7 years after they were taken. Exploring themes of love and insecurity, Ben will discuss why photographs of teenagers are so compelling, and how he is striving to make similar images in his current personal work.

Ben Roberts is a portrait and documentary photographer based in Madrid. He is a contributor to the FT Weekend Magazine and Monocle amongst other publications. His personal projects are diverse, ranging from observing the effects of the economic crisis on the landscapes of Spain, through to young people growing up in the Highlands of Scotland.

We look forward to seeing you there on the night.