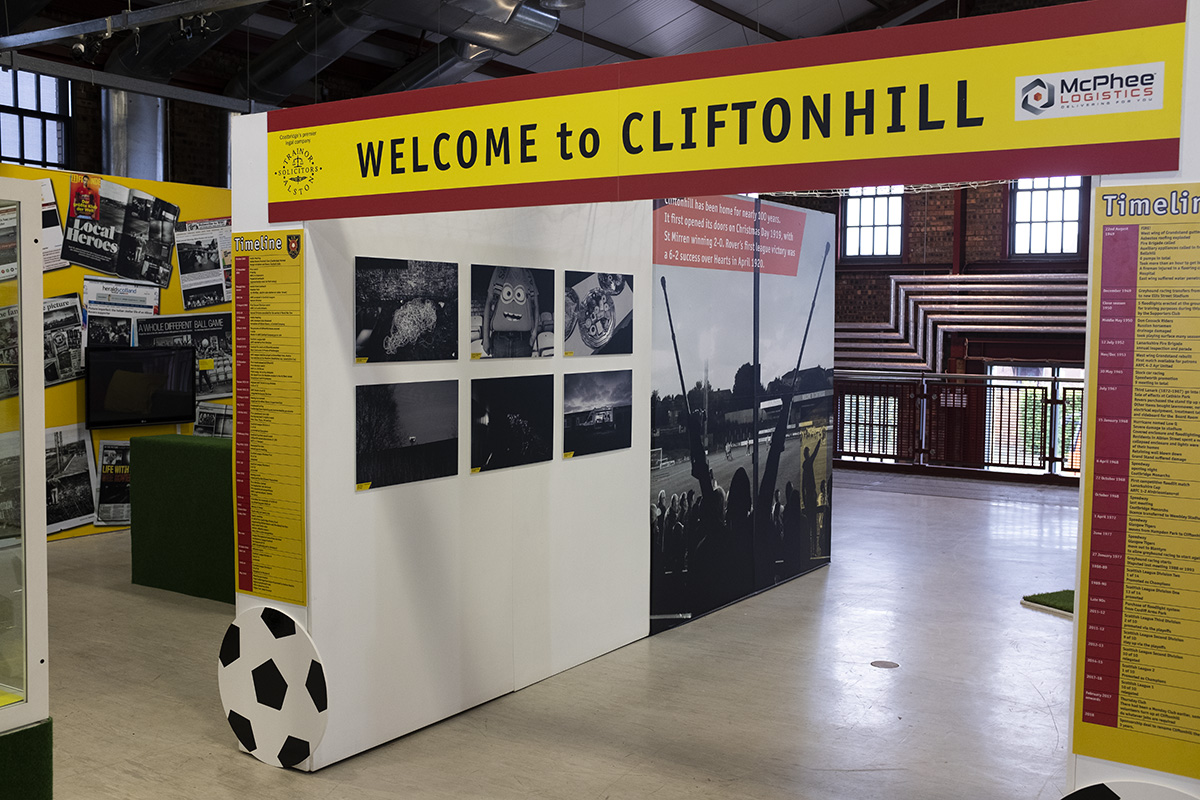 A Game of 2 Halves in Coatbridge

The memories are still ripe in my mind. The rain sliding in a grey sheet across the train window, the cold air colliding with our faces and the wind catching our breath as we alight from the train at the inappropriately-named Coatbridge Sunnyside station. In the distance, piercing the sodden winter gloom, bright stripes of red and yellow paint greet our arrival at Cliftonhill Stadium, home for the last century to Albion Rovers Football Club, one of the also-rans of the Scottish game who have, according to some, merely been making up the numbers since their formation back in Victorian times.

This place is far removed from the higher echelons and glories of the game. It is, however, a place of ritual and pilgrimage. Whilst bus loads of Celtic fans have departed each Saturday from this corner of North Lanarkshire for the sunny upslopes of Parkhead, the few that remain behind have cast their lot in with their local football team, and exhibit the same amount of passion, devotion and love for a club which has steadfastly refused to be pulled across the religious divide that defines so much of this part of Scotland.

In their distinctive and almost hallucinogenic red and yellow colours, Albion Rovers have been ploughing and plodding along for as long as anyone can remember, often derided, frequently ignored, but always there. That we cannot place their name on the map has even become something of a badge of honour for club and supporters. They have this unique identity, one which would be sorely missed if The Wee Rovers ever exited the Scottish League.

And this is nearly what occurred during a tumultuous 2018-19 season: somehow, against all the odds and expectations, Rovers managed to come back from the dead, overhauling fellow sufferers Berwick Rangers and condemning the Northumbrians to relegation and oblivion. It was a close thing, but Albion Rovers survived.

Set amongst these tales of the constant struggle for survival are individual stories, some of heroism, most of stoicism. And one of a photographer: Iain McLean. Almost two decades ago, Glasgow-based McLean was casting around, looking for a long-term project, something sporting to get his teeth into. After rejection from a local rugby club, he received a positive response from Rovers and set about documenting behind-the-scenes at this iconic little club.

After a hiatus lasting several years, McLean once again focused his attention on Cliftonhill and was fortunate enough to witness both promotions and relegations, the contrasting emotions now visible in his newly-opened exhibition entitled A Game of 2 Halves, on show at the Summerlee, the Museum of Scottish Industrial Life in Coatbridge, until 27th October, 2019. It is, due to its location, necessarily folksy and fun, but nevertheless there is a fine body of work which shows a keen eye and dedication to stick with the subject through thin and thin (as life is at Rovers).

McLean’s dynamic monochrome images sit alongside cases of ephemera and souvenirs, memory-jogging reminders of seasons gone by, all in those distinctive bright colours. McLean’s work, however, shows us a colourful side to the Rovers: a kaleidoscope of characters, often in fancy dress, compete with the friendly smiles of tea ladies and kit men, all of whom make up the cast at Cliftonhill.

My own experiences of watching my team playing against Albion Rovers in Coatbridge are many and varied: the seemingly bright idea to take a new girlfriend to her first-ever football match – a stultifying nil-nil draw, which, amazingly, never deterred her from future games. Then there was the time a young boy was admonished for throwing bits of rubble around the tumbledown terracing: “Stop that, Billy, you’re making a mess,” was followed instantly by “Fuck off, dad, I’m tidying the place up!” And no trip was complete with a pre-match pint in Owen’s bar, just a wayward corner kick away from the stadium.

And then there was Victor Kasule: the singularly most mercurial talent I have ever borne witness to on the football fields of Scotland. A diamond in a sea of mud. The grace, skill, poise and speed which could leave any opponent for dead, a winger who could weave his way through any defence and into any bar, the other place where he was very much at home. ‘Vodka’ Vic came to prominence at a time when there was not a single black player playing in any of the professional leagues in this country. And while his career may have trailed off after spells in England and Finland, his legacy and the memories of his dazzling footwork, have upgraded his status from favourite to legend at Albion Rovers and Meadowbank Thistle.

I ask McLean whether he is likely to continue the journey he has been on with Rovers. He is uncertain and I get the feeling he is worried about repetition and seeing the same places and faces over and over again. I don’t think so. My sense is there is a lot more to discover here and that the project could unfold in many ways. In the meantime, raise a glass and wave a scarf to the players, officials, volunteers and supporters of the mighty Albion Rovers. And to Iain McLean for documenting their emotions.