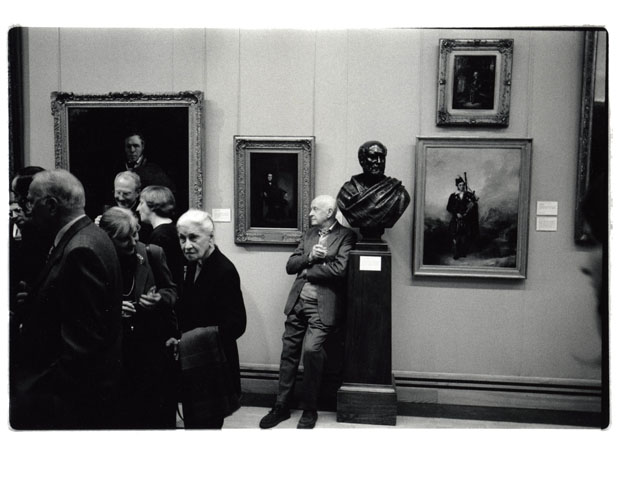 Lesson from the Master

It’s evening, autumn 2012, and I’m at the desk, digging back through the hard-drive of my memory, looking for an evening some thirteen years that is filed away in some dark corner. Henri Cartier-Bresson, Edinburgh, 1999. Eve Arnold too. I do have memories… I also have photographs. Can I trust either? Much as I love it, I don’t trust memory. It fades, warps with time. Alas, let’s be honest, so too do photographs. And as for their relationship with ‘the truth’… well, come on, that’s even more complicated, isn’t it…

Jeremy Sutton-Hibbert, of Document Scotland, has asked me to write something about my pictures of Henri, and naturally, I want to get it right. If in doubt, contact sheets, that’s where to start. They never lie… do they? Isn’t that why we never show them to anyone? Certainly it’s harder to hide the truth on a contact sheet; actions and thought processes are laid bare. And, of course, this fascinating window to the photographer’s soul has become another casualty in the rush to digitise… the dreaded preview/delete process replacing the contact sheet, concealing all manner of crimes. Actually, that’s a different article, isn’t it, for another day, best not go there right now.

So, at Document Scotland’s request, here I am checking up on myself, digging back into my archive, virtual and analogue, looking to see if that night with Henri was indeed memory or dream. And lo, in a short strip of five 35mm frames, there is my encounter with Monsieur HCB, captured in glorious monochrome. Turns out my memories of the night weren’t far wrong, and, boy, do those small, grainy rectangles open the memory banks right up. That’s what pictures do, isn’t it? Triggers. Put them in sequence and Bang! the evening is alive again.

What I do remember now is that my good friend Sara Stevenson, at that time the head curator of the Photography Collection at the Scottish National Portrait Gallery, had taken the unusual step of following up on a Portrait Gallery invitation for drinks, and had got in touch to check that I was actually going to turn up. Invitations to receptions at the SNPG don’t often fall on my mat, so perhaps I should have sensed from the start that something was afoot. Unusually, there was to be not only drinks, but dinner too, in one of the galleries upstairs from the Magna Brava exhibition that was showing, a brilliant celebration of Magnum’s women photographers.

Sara dropped in to the conversation that I might want to bring my camera along. There were to be special guests. Eve Arnold was in Scotland – and there was mention that Henri Cartier-Bresson was somewhere around too. Sara’s casual remark – neither request, nor instruction, but cleverly poised not to be either – was the biggest invitation of all. I wasn’t going to miss this one.

The evening soon came around, and though I have no recollection of spending any time choosing what to wear, it must have had a pocket big enough to slip a 35mm camera into; slimmed down, no motordrive, and a prime 35mm lens (of course).
The contact sheet picks up the story here, and in fact it’s barely a sheet; there are just five and a half frames of Henri, and two simple portraits of Eve at the table, after dinner. I can recall now being so excited that I hadn’t even wound the film on properly at the start – past frame ‘00A’ – so the first half-shot is wasted. Despite my racing pulse, I steadily caught four very similar shots of my subject, looking to tidy the composition, just to get them in the bag – before daring to make a decisive pounce in the final fifth, quite different frame.

The room – one of the upper galleries at the SNPG – was narrow, and busy, groups standing drinking and chatting. One figure is detached from the groups, and watches half-hidden from the edge, clearly choosing to carefully position himself well away from the centre of the room. Copying his tactics, I slid to the side of a group, snapping furtively round the edge of the group. I didn’t want to be seen by anyone, least of all Henri (for, of course, you have guessed, he is the watcher). Sara may have given me her blessing but who knows what would happen if I was spotted.

The picture you see below is my pick of the four frames. I aimed to echo three profiles, Henri, the statue, and the watcher beyond, who, it seemed to me, sought to emulate Henri’s body-language and echo his role as observer. Somebody has stepped back momentarily into the right of my shot, a blur of black, but I still liked this picture the best of the four, the only split-second when all three watchers looked off into the same unseen distance.

Looking through the five shots, it becomes clear that the room is clearing – we must have been called to the table for dinner. Perhaps my nerves had kept me hanging on right until the last minute, I don’t recall exactly. This would explain why I only grab four frames from the side before venturing to the centre of the gallery to try and meet my prey face on.

What strikes in this final frame is to see how nonchalantly Henri is leaning against the bust of Sir William Stirling-Maxwell – who else would be allowed to get away with touching an exhibit like this! And although I have caught my candid moment perfectly, camera coming up and shutter clicking just as he looked away to the side – I had not remembered there was two of the worlds’ greatest photographers to contend with in the same frame – and sure enough Henri’s companion has clocked me; Eve Arnold lags behind the departing group to shoot me a look. Busted. A split-second after I took this, Henri was alerted to me, and what followed, I believe, is a conversation he had countless times.

“Why do you take this picture? Are you the police?”

His voice was loud. I didn’t know whether to laugh or apologise (I think I did both) – imagine being told off for taking a candid shot of the Master of Candid Photography – by the Master himself! Even there and then, I loved the irony. But no matter how many times I have replayed this in my head, I’m still not sure to this day if his indignance was genuine or part of a well practiced act. At the time I suspected the latter, and, thinking I was being toyed with, I tried to play along. But the enigma of the Master remained intact, the conversation broke off, and the moment was over. Henri moved off. I may have fleetingly caught him by copying his own tricks, but even now, combing through the pictures, he gives nothing away. See for yourself. I thought I was the photographer that night, but in all the pictures it is Henri who is looking, ruling the room from the edge, the Master of all he coolly surveys.

1 thought on “Lesson from the Master”