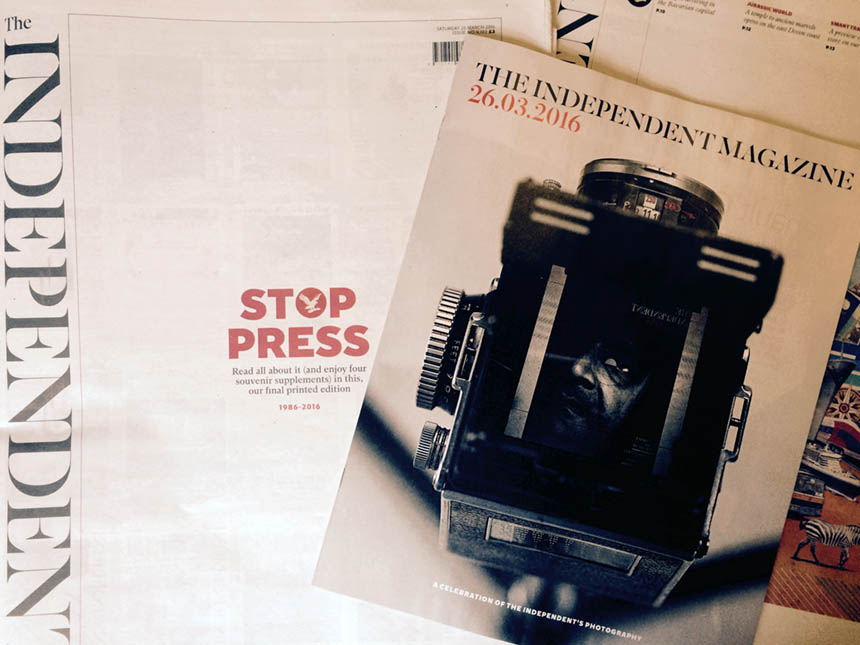 To mark today’s final printed edition of the Independent, Document Scotland’s Colin McPherson talks about his contribution to the newspaper and the motivation behind the publication of a book of his photographs taken on assignment for, or published by, the paper.

Document Scotland (DS): Today, 26th March, the last edition of the Independent will hit the streets. What has been your involvement with the paper?

Colin McPherson (CM): I started working on a freelance basis for the ‘Indy’ in 1995. At the time, I was living in Edinburgh and photographing on a regular basis for the Scotsman and Herald newspapers. The first call I took from the picture desk of the Independent was to assign me the not-too-difficult task of taking a picture of St. Bernard’s Well, for a feature about writers’ favourite places. Given that it was a static object, it was pretty hard to get that wrong.

DS: From those humble beginnings you quickly started working on a regular basis for the paper. Have you any other recollections of those early days?

CM: Yes. Almost as soon as the assignments came rolling in, my former picture editor at the Edinburgh Evening News and Scotsman, Rod Sibbald, took the reigns at the Indy. We always had a good relationship and we would talk on the phone early each morning to see if or what might be of interest to the paper. It would be too strong to say he relied on my suggestions, but he regularly took them up and sent me off across Scotland to get a stand-alone image or cover some major story. The Indy was still broadsheet format at the time, and the ethos of the paper still meant that pictures were as of much value as words.

DS: Were you shooting in colour then, or was it the trademark black-and-white, for which the Independent was famed for?

CM: It was strange. Right up until the late-1990s, the picture desk would allow you to chose. If I arrived on a job and thought, ‘this will make a cracking black-and-white’ I’d  shoot it like that. For some features, where time wasn’t an issue, I’d even have the luxury of making prints in my darkroom and sending them to London. Unthinkable nowadays. Gradually they wanted everything on the news, features and sports pages shot in colour, which they turned mono on the computer. It was then that the look and quality of the paper began to change.

DS: You must have covered some fascinating events and visited amazing places with your camera!

CM: Yes, I was really fortunate that in those days picture desks would have the trust in you – and generally the budgets – to back your ideas. I spent a few days in Sancta Maria Abbey in East Lothian in March 1996 based on persuasion. The result was a page of pictures in the features section on Easter Saturday, appropriately enough, given the subject matter. I loved travelling to the farthest outposts of Scotland and discovering ways of life which were either frozen in time or disappearing, such as peat cutting, salmon netting and doing a feature on Scotland’s last jute mill, in Dundee shortly before it closed.

DS: It was a very explosive time politically in Scotland. And there were other major news stories. Did you cover big events too?

CM: Yes. I was at Dunblane on the day of the primary school shootings, which was really hard. And there was a lot of politics: the campaign to re-establish a parliament in Edinburgh was in full swing and there was Tony Blair’s victory in the 1997 General Election. Every day there seemed to be something going on and eventually it all led to the establishment of the Holyrood parliament and the infamous building project that went with it.

DS: You swapped Scotland for England in 2004, but still kept working for the paper. How easy was that?

CM: Not that straightforward. The daily had gone tabloid, not only in format but mentality. The picture editor at the time didn’t seem to value images as much and many of the ‘big beast’ photographers had moved on – the likes of Brian Harris, David Rose, Tom Pilston and John Voos. Luckily, Sophie Batterbury was in charge at the Independent on Sunday and still commissioned me regularly from my base in north west England. Eventually the picture desks of the two titles merged and I was able to work more regularly across both papers again.

DS: What made you decide to publish a book with your images taken on assignment or published in the Independent?

CM: I wanted to do something to commemorate the paper, to mark its passing. It’s an infrequent event, the death of a newspaper and I thought it might be nice to share some of my favourite images. I didn’t want it to be an authoritative history of my involvement, rather some snapshots of life and how its lived. And some humour too.

DS: The book came together quite quickly, how did you make it happen?

CM: The idea came to me to do something almost the day I heard that the Indy was closing. From that moment it was a bit of a scramble to get quotes for printing, decide on the layout and – most importantly and interestingly for me – select which images I wanted to show. I deliberately avoided including too many staged photographs, relying rather on individual pictures which could tell their own story. I wanted some humour in there too and I took a few liberties with the design to include a couple of pairs of images set against each other. At the end-of-the-day it’s a small, self-published book which I hope people will derive some enjoyment from. For me, it’s a keepsake, something to remember happy times out-and-about photographing for a wonderful, friendly newspaper, one which will be sorely missed by many people.

DS: There’s already been quite a lot of interest in the book. Where can we get copies from?

CM:  Yes, it was featured by Phil Coombes on the BBC In Pictures website, and today’s final edition of the Independent Magazine carries a celebration of their photography which contains one of my images, which is very flattering. The book is available exclusively through my website. Get one, before it too disappears!