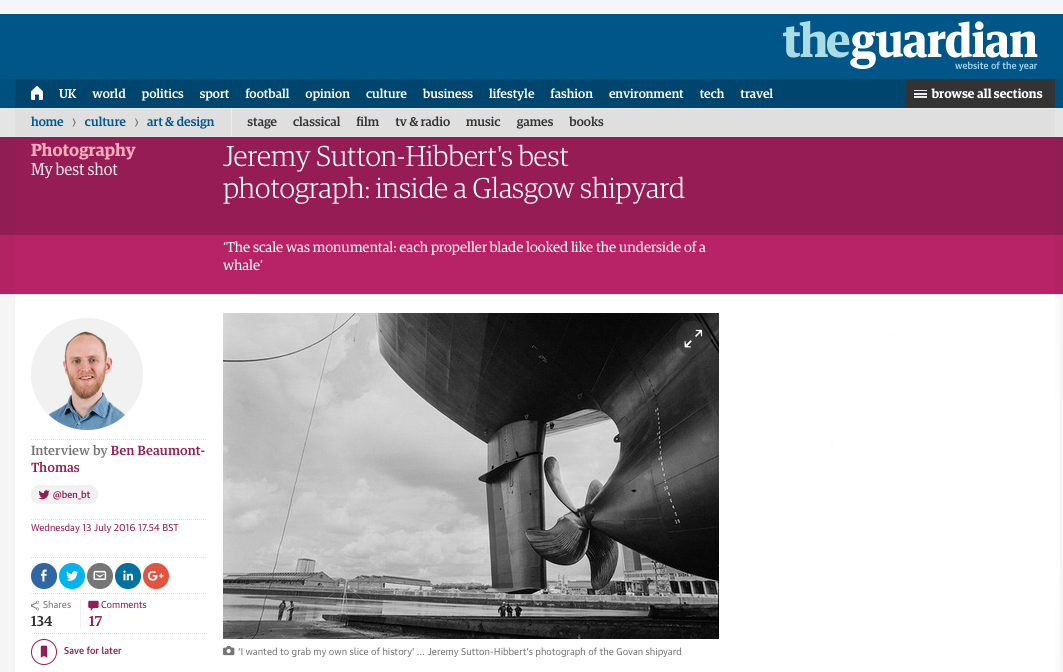 Jeremy’s image from the Glasgow shipyards, taken in 1992 and currently featured in the exhibition Govan/Gdansk at Street Level Photoworks in Glasgow was featured in the Guardian this week with an interview by Ben Beaumont Thomas.

You can read the interview here:

“In the 1990s I lived in Govan, on the south side of Glasgow, near the shipyard. At the time, it was owned by a Norwegian company called Kværner, but before that it had been John Brown’s and Fairfield’s. Those are the famous names in Scottish shipbuilding. You hear talk of the days when 10,000 men worked in the yards. Sadly, that was before my time.

In the 1990s, I travelled a lot in eastern Europe. I remember talking with a worker in north east Romania, far from any coast or shipbuilding area, and he knew of Glasgow as a shipbuilding port. I always thought that was great: I love the fact that my city is known either for Rangers and Celtic – or for shipbuilding.

I wanted to grab my own little slice of Glasgow history. These are the shipyards that helped build the city and make its industrial capabilities renowned the world over. There are three yards in Glasgow now. Two are owned by BAE Systems and dedicated to defence. I haven’t tried to get in, but I’ve been told it’s pretty much impossible. The third yard, Ferguson Marine, nearly went into liquidation in 2014.

I took this in 1992, a year before Glasgow gave Nelson Mandela the freedom of the city – another project I worked on. I was 24 and wanted to get into the yards before that world disappeared. I remember being impressed by the monumental scale of it all. Parts of the ship seem quite organic: the blades of the propeller look like the underside of a whale. I shot it on an old Nikon in black and white, as that puts the focus on shapes and sizes. People have asked me if it’s perspective that makes the workers look so tiny. But it’s not. They are to scale.

A launch is an incredible thing. You hear all the klaxons going off, the speeches, the champagne bottle being broken against the ship. Then the wedges and things that hold the ship in place somehow get removed and the ship starts to slide. As it gathers pace, those huge restraining chains make an enormous noise and all the rust and dust rises into the air. The sound would echo off the buildings all around. It was a romantic, emotional moment.

A guy agreed to take me round in exchange for a print to hang in his house. I was no student of shipbuilding. I just reacted to what was in front of me. I seem to remember thinking the yards were “stour” – that’s a great Glasgow word, meaning musty and dusty. I mean, you’re outdoors and beside a river, so you get a lot of fresh air, but these are still big dusty places.