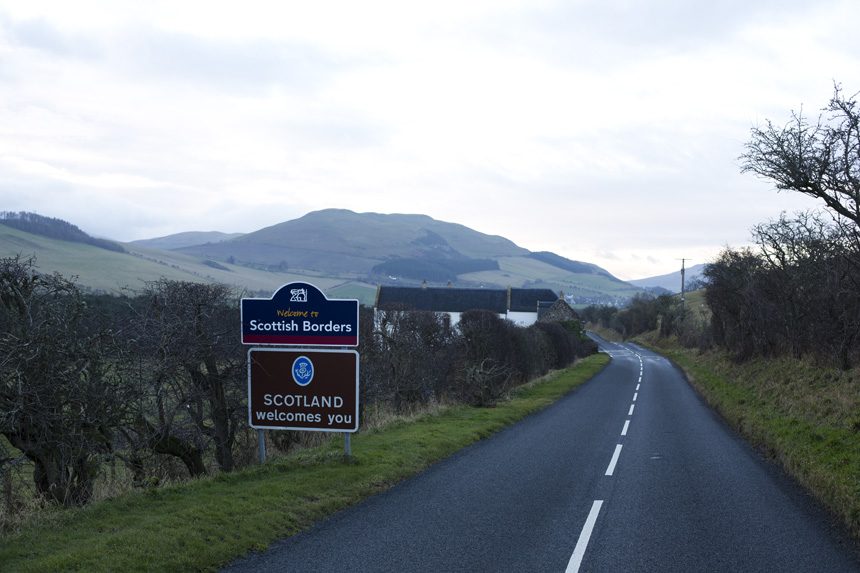 After a year exploring Scotland’s 96-mile border with England, Document Scotland’s Colin McPherson finally reached the point of no return. Here he explains some of the discoveries he made during his journey from the Sark to the sea.

My journey was slightly different, in that it involved coming ‘home’. As an exile in England, I have long had that slightly schizophrenic feeling of being rooted in two places: the home where I live with my family, surrounded by people and places I love, things that I do and familiar feelings. The place where I belong. Then there’s the other home: the place where I am from, which still tugs at my heart, makes me grimly nostalgic and longing for the smell of the heathery hillsides and the breweries of Auld Reekie.

So for me, the voyage of discovery I set out on 12 months ago along Scotland’s frontier with its southern neighbour was always going to be about much more that the physical geography of the border. More even than the political, social and cultural similarities and differences between the people whose lives straddle the divide. No, it was always going to be about me and how I feel about Scotland, about what has happened to my nation in the past and what awaits her in the near and distant future.

I set out without a plan, but with a head full of research, ideas, themes and possibilities. I left a lot to chance: encounters led to conversations and I found myself talking obliquely on subjects as diverse as bowling in Gretna, Black Rock hens, God, salmon fishing, shopping in Kelso and even, occasionally, that referendum.

The border is much more than rolling hills, fresh air and tiny towns nestling in the landscape. The people are as diverse as almost anywhere else on these islands. The characteristics of the Borders are often defined by battles, poets, rugby and farming. But there’s more there if you care to look hard enough. And there’s the border itself. Half mirror, half barrier? Or a feathered edge which simultaneously unites and divides and at the same time defines.

With the exception of a winter expedition to conquer the mighty summit of the Cheviot (whose apex peeks over into Scotland from Northumbria), I undertook the whole project on my own. On that occasion my companion was my longest-standing friend, fellow artist and exile, Scott Anderson. On the freezing slopes we were little boys again, imagining we were part of those invading armies of yore, engaged in creating historical facts on the ground. The warm welcome of the pub at Kirk Yetholm brought us back into the 21st century, wind-battered but happy.

The full story of my year on the roads, hills, fields and lanes will be told at Document Scotland’s forthcoming ‘Beyond the Border’ exhibition at Impressions Gallery, Bradford (1st July – 27th September, 2014) where my project, entitled ‘A Fine Line’ will be shown in full for the first time.”