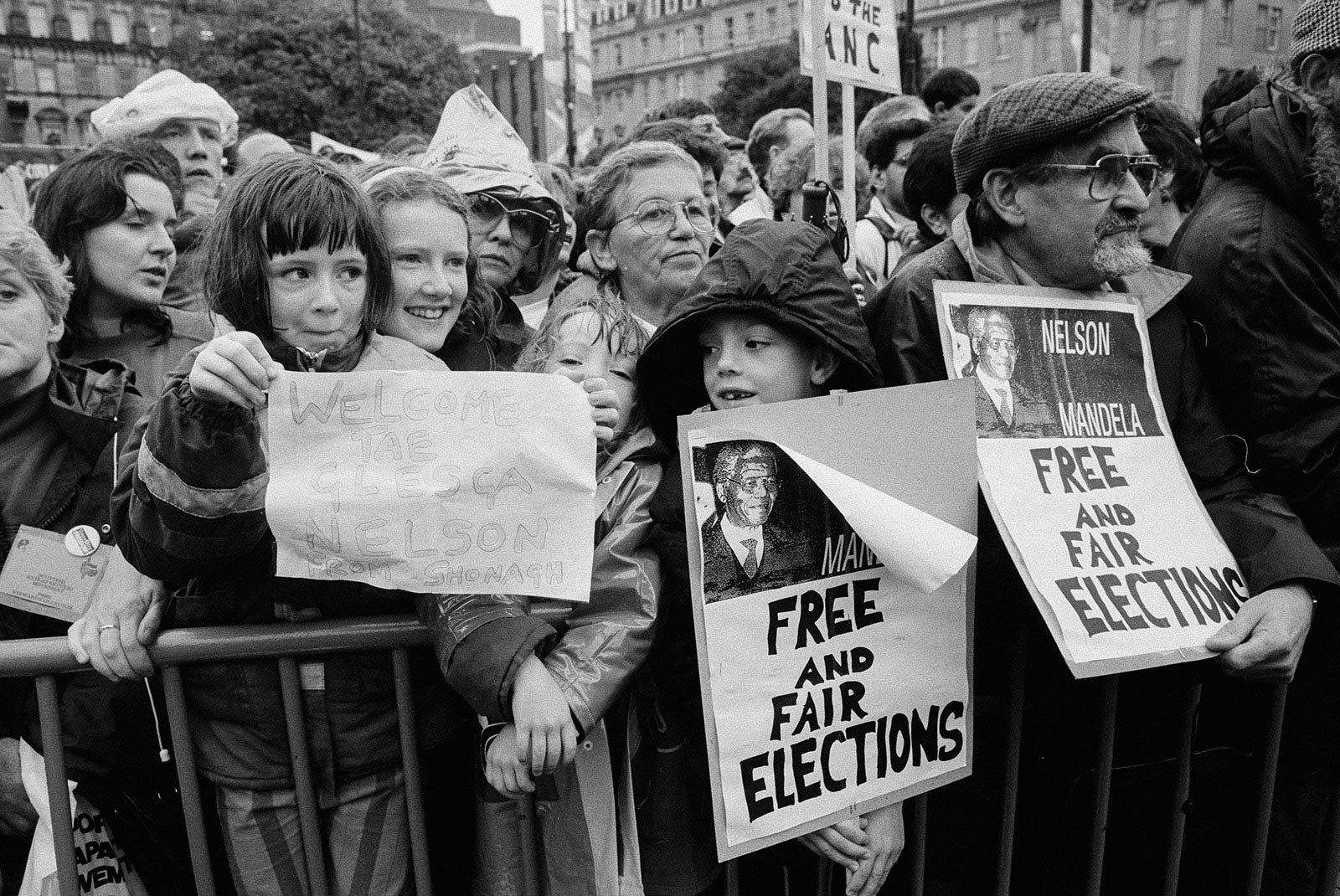 Jeremy Sutton-Hibbert’s images shot during the visit of Nelson Mandela to Glasgow in 1993, go on display this month at the City Chambers in Glasgow. Coinciding with Black History Month, the small exhibition has been made possible with the support of Street Level Photoworks, and depicts the events of the visit of Mandela to Glasgow to receive the Freedom of the City.

2018 marks 100 years since the birth of Nelson Mandela. Known and loved around the world for his commitment to peace, negotiation and reconciliation, Nelson Rolihlahla Mandela was South Africa’s first democratically elected president (1994 to 1999). Mandela was an anti-apartheid revolutionary and political leader, as well as a philanthropist with an abiding love for children. In 1963 he was imprisoned by the Apartheid government of South Africa and was sentenced – with seven others – to life imprisonment in 1964.

Glasgow was the first city in the world to honour Nelson Mandela with the Freedom of the City, in 1981, nine years before he was released from prison. In a bold move to send a message to the then apartheid regime, the Glasgow City Council also renamed St George’s Place as Nelson Mandela Place in 1986. This was seen as highly significant as this then became the address of the South African Consulate, which was based there.

In October 1993, two years after his release from prison, Mandela came to Glasgow, where he was described by the then council leader Jean McFadden as “a symbol of the fight for equality and freedom across the world”. The event famously saw Mandela dancing on stage in George Square, to the delight of the crowd of 10,000 people who had come to see him.’

Award winning Scotland-based editorial photographer Jeremy Sutton-Hibbert was one of the photographers there that day, and these images are a record of that event. Previously published as a pocketbook by Cafe Royal Books, this is the first time these images have been seen in Glasgow.

In his acceptance speech in October 1993, Nelson Mandela said of Glasgow, “…It is a privilege to be a guest of this great City of Glasgow. It will always enjoy a distinguished place in the records of the international campaign against apartheid.

The people of Glasgow in 1981 were the first in the world to confer on me the Freedom of the City at a time when I and my comrades in the ANC were imprisoned on Robben Island serving life sentences, which in apartheid South Africa then meant imprisonment until death.

Whilst we were physically denied our Freedom in the country of our birth, a City, 6,000 miles away, and as renowned as Glasgow, refused to accept the legitimacy of the apartheid system, and declared us to be free. And in a real sense we were free, because however cruel the treatment meted out on us in prison, we never lost sight of the vision of a new South Africa as enshrined in our Freedom Charter. The City of Glasgow in granting us the Freedom of the City also took upon itself a very special obligation. It resolved to do everything possible to secure our freedom from the prisons of apartheid. It took up our plight in Britain and internationally. For example, the following year the Lord Provost co-ordinated a Declaration signed by over a thousand Mayors from 56 countries across the world which called for our freedom. Then in 1985 it joined with over 100 British local authorities in petitioning the then Prime Minister Margaret Thatcher, to press for my release. Such initiatives were thankfully successful…”