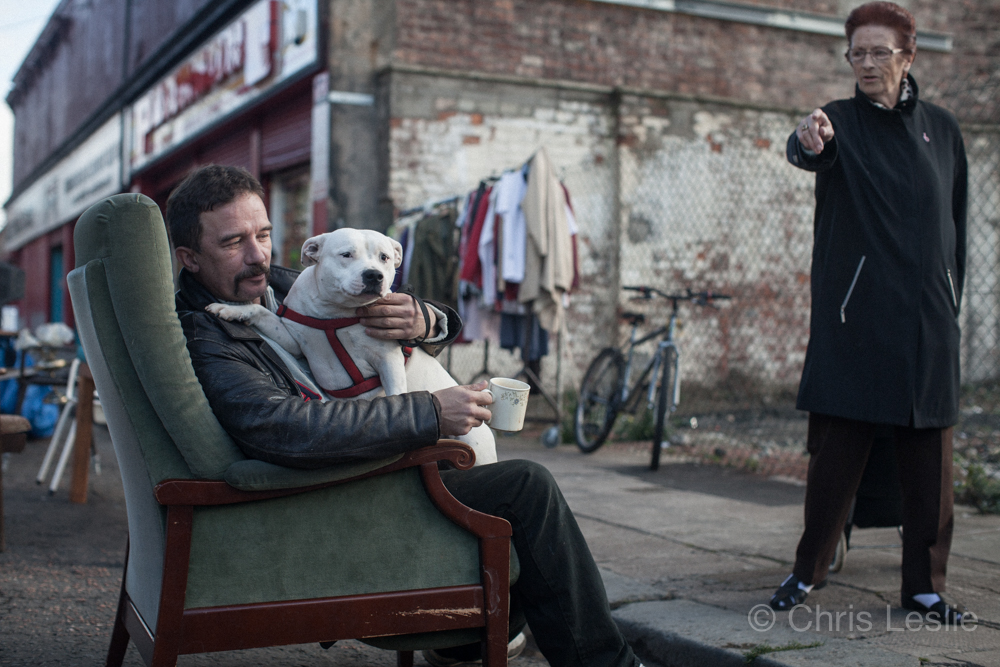 We recently caught up a a Street Level Photoworks show opening with photographer Chris Leslie, who has been working hard these past three years photographing and documenting Glasgow’s East End and the transformation underway there. Chris has been working with 2 other artists and has recently published Nothing Is Lost, a box set of books. We asked him a little more about how it all came about… – Jeremy

“Glasgow’s East End is synonymous with poverty – some of the worst in Europe. With Glasgow’s winning bid for the 2014 Commonwealth Games came a promised legacy of change and regrowth, of rebuilding, economic and cultural investment – of a new East End, where gap sites were filled and populations returned.

Nothing is Lost: Three artists, three artforms, one city, a shared sensibility. Alison Irvine, Chris Leslie and Mitch Miller set out to document the East End before, during and after the Commonwealth Games. They met market traders, travelling showpeople, playworkers, community activists, cafe owners and local children. They gathered stories and sought out images from the places changed by the Games, those largely untouched, and those left behind.

Nothing is Lost is offered both as a question and a statement – Are things better for the East End? Worse? Much the same? Nothing is Lost offers no neat answers or comforting fictions. It offers up hope, complexity, nuance and doubt – a way for the reader to work out the truth of the post-Commonwealth city for themselves, through words, photographs and dialectograms.

Alison Irvine provides the words. Alison is a novelist who weaves stories from intensive research. She teases out stories, testimonies, moments, follows networks of friends, relatives and acquaintances. In her spare but textured prose the characters speak in select, but eloquent voices that speak from, and of the place itself.

Mitch Miller makes dialectograms, illustrations as idiosyncratic as the word suggests, the edges of the city drawn from on high, but as those at ground level see and live it – an intricate, entangled and glorious mess – place as something made up as we go along.

The story they tell takes us from the glamour of the Barrowland Ballroom to the hidden communities caught in the crossfire of major regeneration. It taps into the hopes, fears and dreams of East End youth and the fading memory of demolished districts and East End entrepreneurs. We meet Games volunteers and visit the Adventure Playground built by Assemble Architecture in sight of the new Athlete’s Village in Dalmarnock. We find an East End of many faces, and many possible futures.” – Nothing Is Lost

And of of his own approach to the photography, Chris tells us  “A two year residency to document the impact of the Commonwealth Games on the culture of the East End’ was always going to be a tall order.  In reality these photographs only scratch the surface on what could have been a long term / full time project on each area I looked at.

I photographed The Barrowland Ballroom – the 1960s decor jewel in the crown for the East End and its music culture. The Market – documents the Barra’s market in its long prolonged demise and The Wasteland shows the transformation of the historic Schipka Pass to the temporary Barrowland Park.

I had expected many things to change over the period – the way the media bigged it up – the East End was to become unrecognizable and a new utopia. Whilst some places disappeared altogether (Schipka Pass) – much of the Barra’s Market and Ballroom remained the same throughout the residency.

But change for the market is already underway – artist studios and pop up exhibitions are taking place so perhaps these photographs will become dated and more important if you were to photograph the same locations in 5 years time.  Perhaps that will be my next project – I hate the idea of only scratching the surface….”

You can see the Nothing Is Lost website and order the limited edition box set here.