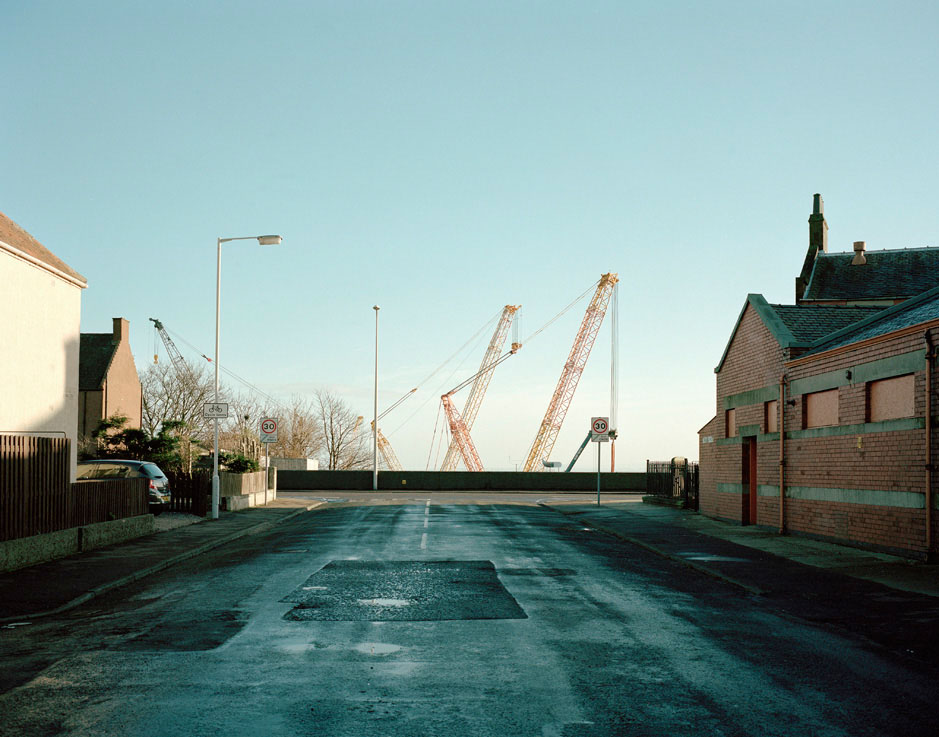 Gregor Schmatz has recently finished a BA Photography at Edinburgh Napier University. Document Scotland caught up with him and had a chat about his ongoing degree show project about Methil in Fife, Scotland.

DS: Tell us a little about yourself Gregor, and why you decided to make this particular project.

GS: I was born in Germany but grew up most of my life in Luxembourg. After a brief year in Australia I moved to Edinburgh where I completed a degree in Photography at Edinburgh Napier University.
Currently I am pursuing a career as a freelance editorial photographer.

DS: What were your original hopes, objectives and ambitions for shooting the work? Why make this project?

GS: I knew that there was a lot to explore visually, just interesting photos to be found. But I also liked the project because it is of contemporary interest on a national and UK wide basis, I could sell this project in different ways.
But the subject matter was different from what I have done before, so I also had to adjust and think things through a bit more. Plus after 4 years in Edinburgh I am very happy I ended  the course with a particularly Scottish project.

DS: Why did you decide to shoot it in the way you did?

DS: Did you know Methil before? Why there?

GS: I drove through Methil with friends from Fife, that’s how I came across the area first. I knew I could shoot there pretty much immediately.

DS: What do you think these photographs say about Methil?

I tried to portray it in a way that people can make up their own mind but at the same time I was also aware that Methil had a overly bad reputation already and I wanted to focus on the everyday there, not the extreme.

DS: In your introduction you call Methil “an overlooked Scottish town.” What do you mean by that?

GS: Simply that most people never heard of it, or if they did, it was something bad. And there are many places like this; unknown towns, which actually have a huge history but lost their industry and slowly became increasingly desolate.

DS: Have people in the images, from Methil seen the work and if so what feedback, thoughts do they have on the work?

GS: Only one pair have seen them and they liked the images, but they were also surprised of the images. I think it was just a bit strange for them to see a series of images about their town, places they see everyday. All the other people in the photos were short encounters, I have no contact details.

DS: You’ve been studying at Napier for the last few years, how did you get started in photography and can you tell us a little about your journey to where you are now as a photographer?

GS: I think I first bought a SLR before travelling, that’s when I started seeing all the possibilities and just started taking photos and never got bored of it. My project “Amerikanare” was a project I started at the end of the first year at University. It was my first serious project and I went back last summer to finish it and the final project was exhibited in Boston and published in a couple of magazines. This is the project where learning curves were the most obvious and I learned a lot from doing it. Looking back I definitely feel more secure in my image making and more defined, but it just took time. I think I always had certain tendencies or preferences in photography but the course at Napier gave me the chance to explore many different styles and get better at taking photos through many many small projects. But I am far from settled, there are exciting times ahead.

DS: You mention that this project is still on going – what plans do you have to continue?

GS: I just learned that the Windmill plant will actually shut, so this is a bit a sad ending, however I will try and expand the series to the Levenmouth area.

DS: What are you up to right now? How are things since graduating and what are your future plans?

GS: Very good! I had a great exhibition in Boston as part of the Flash Forward Festival and some nice magazine and online features, creating some important contacts for the future, so I feel pretty lucky!

Thanks Gregor – to see more of Gregor’s work visit his website www.gregorschmatz.co.uk