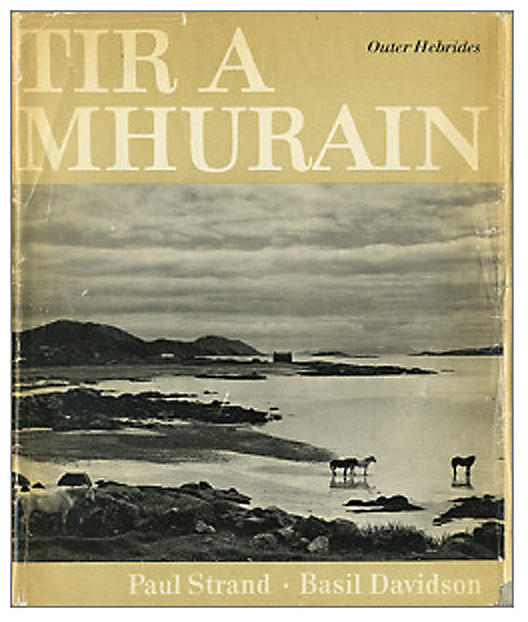 Paul Strand‘s book of Hebridean photographs, ‘Tir a’Mhurian‘, was published fifty years ago this month. In The Guardian’s Scottish Blog Fraser MacDonald, of Edinburgh university, reviews it’s relevance and the background to Strand’s project. By kind permission of Fraser MacDonald, and The Guardian we republish his article here.

There are more than a few odd things about Paul Strand’s book of Hebridean photographs Tir a’Mhurain which was first published 50 years ago this month.

Consider, for instance, this remarkable coincidence: a notable Marxist photographer, an exile from McCathyite America with the FBI on his trail, arrived in South Uist within weeks of a secret survey of the island as a possible testing range for America’s new nuclear missile.

What about Strand’s blind insistence, at the height of the cold war, that his book only be printed in Leipzig, East Germany? He cited technical rather than political reasons, favouring a special print process that was only available on the other side of the iron curtain.

Another oddity: when looking for an author to write the accompanying text to Tir a’Mhurain (Gaelic for Land of the Bendy Grass), he rejected many eminent Scottish writers (Hamish Henderson, Neil M. Gunn and Sir Compton Mackenzie) in favour of an English journalist. Basil Davidson (who died in 2010) ended up writing a pitch perfect commentary but until this commission he had never even been to the Hebrides.

Tir a’Mhurain is as strange a book as all of this might suggest.

Strange too is that this is a work of high Modernism with an affinity for folk culture. It embodies a steely Marxist aesthetic but remains subtle and sensitive to the individual islander. And though now neglected, it is surely one of the most important moments in the portraiture of Scotland.

Strand certainly thought so. Not given to self doubt, he ranked himself third in the pantheon of world photographers, after Scotland’s David Octavius Hill and the Frenchman Eugène Atget.

This sort of egotism is not particularly attractive but nor is it entirely wide of the mark; within the history of Scotland’s photography, only Hill has a prior claim to significance.

Yet even now Paul Strand does not get the recognition he deserves, at least not on this side of the Atlantic. Imagine if Strand’s colleague Ansel Adams had shot a Scottish Highland portfolio? The emporiums of Scottishness on the Royal Mile would be brimming over with the supersized prints and calendars.

Strand’s work is rather less accessible. It was always expensive for one thing – ostensibly because of his belief in the integrity of the photographic print as an original artwork. He berated Adams for allowing his work to be reproduced in poster form though it was precisely this strategy that sealed Adams’ reputation as America’s pre-eminent landscape photographer.

Strand’s landscapes make no bid for Adams’ sublime grandeur. They have a depth that is less yielding to a casual glance; he makes us work to think about the relations between and within images – the ties of labour that bind Hebrideans to the landscapes of their making.

Tir a’Mhurain was in many ways a political project in the guise of an ethnographic one. He pictured locally celebrated tradition bearers – the bards and storytellers – and he did so straight; no tricks.

As Davidson observed, “We are looking at subjects not objects; but these same subjects are also looking back at us, again at us as subjects, with the same intense equality of interest.”

Outraged by what he saw as an aggressive Nato militarism, Strand originally conceived of Tir a’Mhurain as, in part, a protest against the development of the rocket range in South Uist.

But by the time the book was finished, the rocket range was already a done deal and the Corporal missile – the world’s first nuclear missile – was soaring high over the Atlantic towards St Kilda.

With bleak timing, the book was published just weeks before the Cuban missile crisis when the world came closest to the scenario of “mutually assured destruction”. It was in these dark days of the cold war that Strand held out his vision of Hebridean community as an inspiration. But his own native land was having none of it.

The United States banned the book unless imported copies bore an obvious stamp ‘Printed in Germany, USSR occupied’ – a stipulation to which they knew Strand would never consent.

As a committed communist, Strand was often at odds with the political climate. That history didn’t exactly go Strand’s way is evident by the fact that, long after the end of the cold war, the South Uist rocket range is still open for business – though as a privatized industry now run by defence corporations.

But still the photos remain – evocative portraits of Scottish lives and landscapes under the shadow of the bomb.