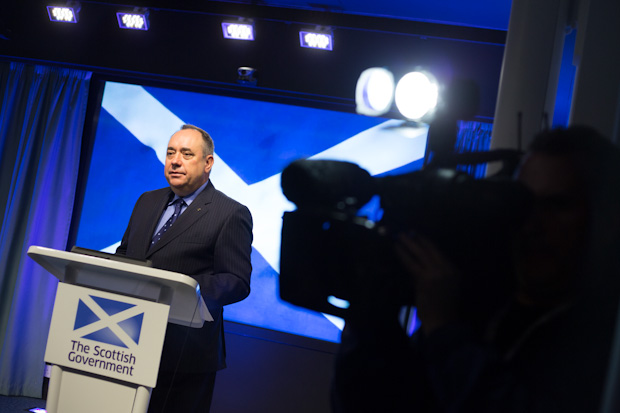 “In the shade of St. Andrew’s House the press awaited the appearance of, and handshake between, Scottish First Minister Alex Salmond and British Prime Minister David Cameron. The cold seeped to the marrow of journalists and photographers, as the police and politician’s aides kept us all behind barriers. With little fanfare, and with the lone shout of one saltire-carrying spectator, the politicians appeared; some smiles, a shake of the hand, all stage left away from the door upon which was written The Scottish Government; the photographers cursed, their intended image abruptly altered; the politicians stood, all looking their separate ways, and then with a few words from Alex Salmond, they turned and headed indoors, to the heat and to sign the historic 30 Clause document which gives the Scottish Government the authority to hold the referendum on Scottish independence. An historic day, marking the beginning of the 100 weeks of political campaigning, but a day which lacked an iconic image.” – Jeremy Sutton-Hibbert