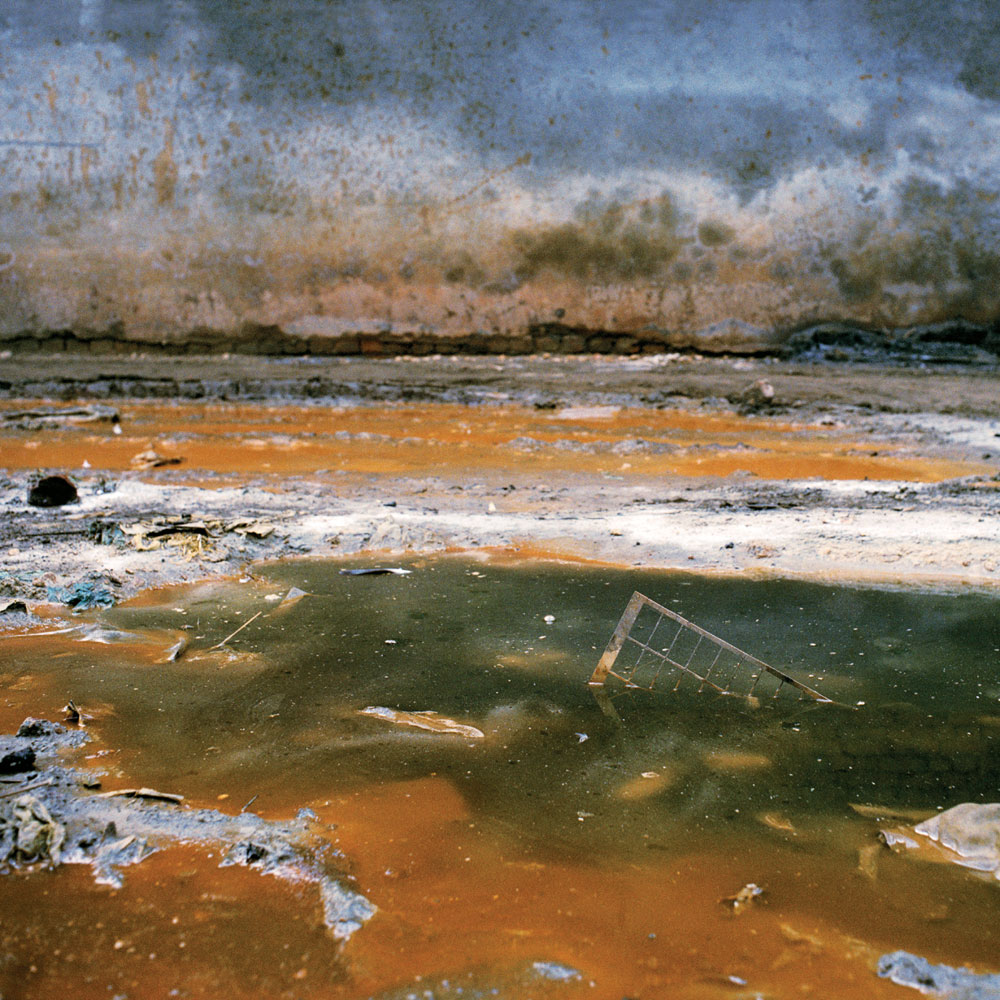 E-Wasteland is a project which Sophie Gerrard undertook in India to highlight the problems created by the 20-50 million tons of electronic waste known  as “e-waste” generated annually worldwide. In Europe and the US, we throw away an old computer, on average, every 2 years. In the US for every new computer bought, an old one is thrown away. Nearly one million tonnes of Waste Electronic and Electrical Equipment (WEEE) is discarded in the UK each year.

In Scotland in 2013, the Scottish Environmental Protection Agency (SEPA) undertook specific intelligence-led work targeting illegal waste operations that cause pollution and harm to the environment. The transportation and export of illegal electronic waste in HGV’s and the operation of illegal waste sites is being addressed jointly by SEPA and the police in order to tackle serious organised environmental crime.

Each year, thousands of tons of old computers, mobile phones, batteries, cables, old cameras and other e-waste are dumped in landfill or burned. Thousands more are shipped, illegally, from Europe, the UK and the USA to India and other developing countries for ‘recycling’.  Some is sent as scrap, some as charity donations. This isn’t just India’s problem, it’s the UK and Scotland’s problem. We are responsible for much of the illegal waste being sent overseas.

E-Wasteland: The growing problem of E-waste in India shows the effect of this toxic and illegal trade and documents the e-waste recycling industry in India. The project was shot in 2006 in four major Indian cities of Delhi, Bangalore, Mumbai and Chennai.

Since 2006, there has been an ever increasing demand for electronic goods. Two recent UN reports, published in April 2013, raise the alarming fact that as the worldwide demand for electronic goods increases, global metal needs could become almost ten times more than all the metals currently used in the world. Both reports suggest that manufacturers must act now, making products easier to recycle and the precious metals within them easily recoverable.*

Similarly a report, also published in April 2013, commissioned by the Gaia Foundation, estimates that 130 million mobile phones are thrown away annually in the United States. Collectively, they include almost 2100 tonnes of copper, 46 tonnes of silver and 3.9 tonnes of gold.**

India has become one of the world’s largest dumping grounds for e-waste. The problem is growing fast. E-waste is highly toxic. It contains lead, cadmium, mercury, tin, gold, copper, PVC and brominated, chlorinated and phosphorus based flame retardants. Many of these heavy metals and contaminants are extremely harmful to humans as well as to animals and plants.

The Basel Convention, of which the UK and India are signatories, bans the transportation of hazardous or toxic waste from the developed world to developing countries. This illegal toxic trade is, therefore, in direct violation.

“I worked on this project in India over a period of about 4 months in 2006. My initial expectations had been to find large industrial sized recycling yards of the scale I’d seen documented in China by artists such as Edward Burtynsky. When I reached India however, and visited the slums and recycling areas of the cities I discovered that the e-waste industry was far less obvious and much more hidden away. Sometimes the computer breaking and storage was taking place inside people’s homes. My research and searching took me from backstreet recycling yards, into slums, scrap yards, markets and houses. The men, women and children I met and photographed along the way working in this unregulated and illegal industry did so with no protection, in unsafe conditions and with no visible concerns for their health, safety or for that of the surrounding environment.”

E-wasteland was used as part of a Greenpeace International report on electronics and toxic waste. The project has been exhibited in the UK, Sweden, India and Singapore, it was awarded a number of international photographic awards and bursaries including a Jerwood Photography Award. For the full series and more information please visit www.sophiegerrard.com. You can purchase a Blurb book of E-wasteland on the Document Scotland publications page and limited edition prints from the series are available to buy through The Photographers’ Gallery. The series has been written about and featured in a number of photography blogs and articles including Conscientious by Jörg M. Colberg, Mrs Deane, LPA Blog.

*UN Reports published April 2013 “Environmental Risks and Challenges of Anthropogenic Metals Flows and Cycles”which provides an overview of the environmental challenges of metals and the potential contribution of recycling to mitigate them, and “Metal Recycling – Opportunities, Limits, Infrastructure” which outlines improvements required to metal recycling systems in the 21st century.
** Gaiia Commissioned Report published April 2013 “SHORT CIRCUIT: The Lifecycle of our Electronic Gadgets and the True Cost to Earth” (2013) Author: Philippe Sibaud, co-authored by The Gaia Foundation, edited by Amy Woodrow Arai.