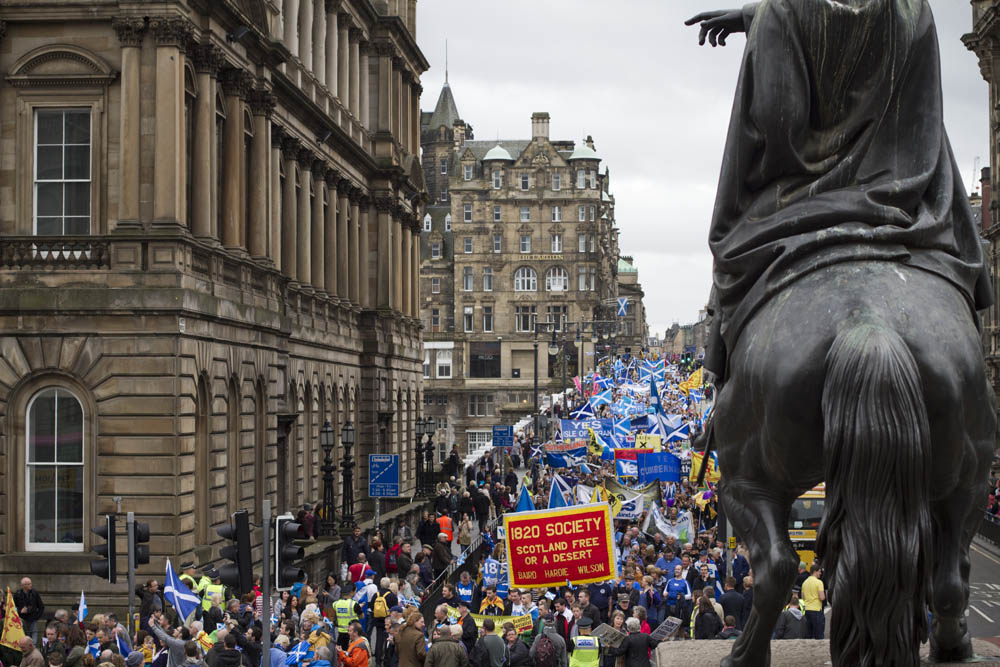 Scotland on the March

Saturday 21st September, 2013: thousands come to march in support of a ‘yes’ vote in the following year’s Independence referendum. Edinburgh provides the venue and historic backdrop for this milestone event. Document Scotland photographers Jeremy Sutton-Hibbert and Colin McPherson were on hand to document the day.

As the crowds gathered in the High Street, so our photographers went to work, capturing the mood and atmosphere of one of the biggest political demonstrations in the Scottish capital city for years. They came from across Scotland and beyond, the ubiquitous kilts and saltires mixing with flags from Sardinia, Catalunya, Flanders and even Venice. At times it looked and felt more like an away day with the Tartan Army, rather than serious political protest. But I guess that’s the way the Scots do it: colour, humour, banter and a wee bit of Braveheart bravado.

As the marchers processed down North Bridge and up to the rallying point on Calton Hill, Edinburgh’s magnificent skyline revealed itself. It was hard to ignore the stunning background, a 360-degree panorama encompassing urban, rural and maritime. The grey, sober wash of the hintergound  contrasted vividly with the pro-Independence foot soldiers. Songs were sung, speeches made, photographs taken.

The skirl of the pipes finally fell silent as the crowds drifted away from Calton Hill at the end of the day. Down on Princes Street, the faithful were swallowed up by shoppers, tourists, hen parties and locals. All that remained were the media, scribbling, filming, editing, filing and recording an historic day.