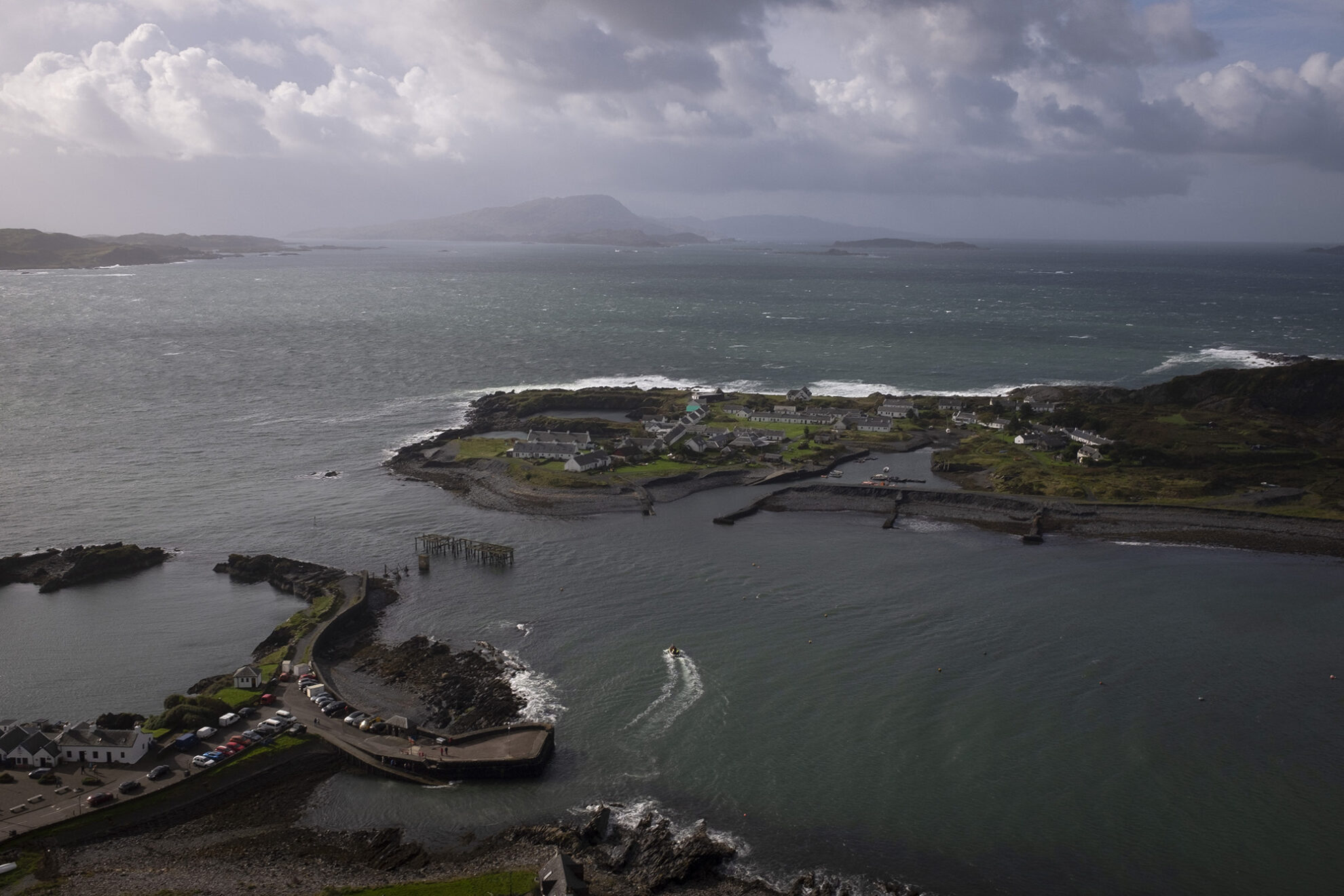 I first visited the island of Easdale in autumn 1989. I must admit, I’d never heard of the place, a small clump of rock protruding from the Atlantic a few miles south of Oban on the west coast. As we clambered aboard the passenger ferry with our provisions for a weekend away, I reached for my camera and made a single image of the ferryman on the three-minute journey. I didn’t know it then, but that instinctive action started a love affair with the place which has lasted over three decades.

Easdale island is still the smallest permanently-inhabited Inner Hebridean island. Originally, it was famed for its slate, which it was said ‘roofed the world’. The island was connected to the outside world by sea, with everything required to sustain life brought in and out by boat. The slate industry was decimated by a single storm in 1881 and by the 1960s, the population had shrunk from 400 to four. Eventually, second-home owners bought the ruined cottages and a clutch of pioneering families settled Easdale once again, leading to a revival in fortunes in the 21st century. Today, around 65 people live permanently on Easdale. You can reach it by road – plus ferry – and you won’t hear Gaelic spoken these days, but in many respects, it remains unchanged.

Over the course of the last 30 years, I have made countless trips and spent many happy days and weeks on Easdale. I even lived there for twelve months. I’m still committed to and invested in the community and run photography workshops there each year. In summer 2018, I decided to make a concerted effort to document life on the island, to put down a visual record of the day-to-day lives of the people and the annual events and activities which sustain them. The experience allowed me to restart conversations and renew friendships which had drifted along over the years. It gave me the opportunity to think about how a community, which faces extraordinary economic and environmental challenges, could be represented through photography. I called my project Treasured Island.

The series went on to form one of the four projects which made up A Contested Land, Document Scotland’s exhibition which premiered at the Martin Parr Foundation in Bristol in January 2019 and went on to tour venues across Scotland and England throughout the rest of that year. I was delighted to be able to present the work to the community on Easdale at one of our salon evenings too. The response to the work that night was the same as it has always been: encouraging and positive.

Despite the restrictions on travelling to and visiting Easdale during the COVID-19 crisis, I managed to spend time on the island in the summer of 2020, continuing to chronicle island life as it faced up to the pandemic. The whole project feels like a work-in-progress, and as the island changes, as it surely will over the coming years, I am determined to keep my focus on Easdale and record what happens next.