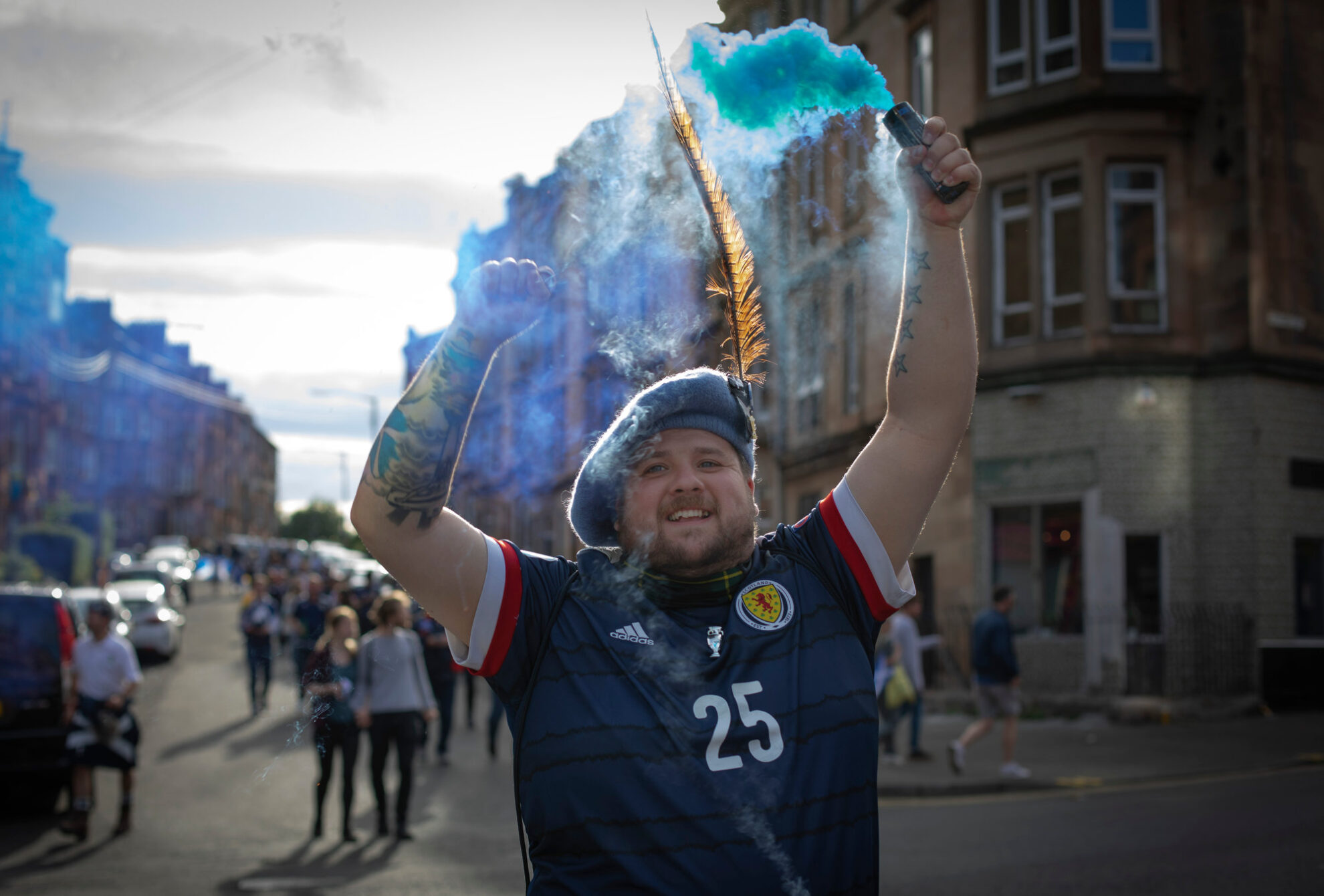 We’ll be coming down the road… by Colin McPherson

When you hear the noise of the Tartan Army boys,
We’ll be coming down the road.

After an absence of 23 years, Scotland’s men’s national team finally qualified for the finals of a major international football tournament. It was a moment of celebration and then great anticipation, as two of the matches at the European Championships would be played on home ground, at Hampden Park in Glasgow. At last, the self-styled Tartan Army could look forward to attending matches and supporting their team against some of the best teams around.

With Covid restrictions being gradually lifted, it was announced that 12,000 fans, a quarter of the national stadium’s capacity, would be allowed in to attend the matches. For me, this offered an opportunity to travel to Glasgow and sample the unique atmosphere of a Scotland game in the streets and lanes around the ground in the build up to the kick-offs against both the Czech Republic and Croatia.

It also gave me an opportunity to think about how we, as Scots, see ourselves and the image we project outwards, at a time when the political landscape continues to be defined and redefined by the coronavirus pandemic and its aftermath, the consequences of Brexit and talk of a future referendum on independence.

I couldn’t help wondering whether the Tartan Army, overwhelmingly male, white, boisterous and from what we still choose to describe as a working class background, represents Scotland accurately as we enter the third decade of the 21st century? Does the colourful mishmash of kilted costumes, the adaptation of quasi-military insignia and apparel, engender a backward-looking view of how we see ourselves, rooted in a past which is both mythical and based on a tangled web of historical narratives?

On the other hand, maybe we should not over-analyse what is, nevertheless, simply a large group of dedicated sports fans, who turn up undaunted and undeterred, to follow and support a national team whose successes have been conspicuous by their absence over the last few decades.

I was brought up at a time when Scotland could and did compete on equal terms with the best teams in the world. We have always produced individual players of great flair and some genius, but being a small nation competing against global behemoths, the dice has always been loaded against Scotland when it comes to putting out a whole team of genuine international-quality stars. Nevertheless, the team has done us proud on many occasions, and there is genuine affection for, and interest in, the fortunes of our men’s national team.

It is the little personal moments of connection which elevate photography from the passive to the interactive. It is where and when you feel involved in a story. At that moment, I was no longer a photographer, but, like thousands of others around me, I was back in my kilt, surrounded by my friends, hearing the noise of the Tartan Army boys, as I was coming down the road.

To hear the story of Jim Todd (above) and his lucky mascot Hamish the Bear, why not become one of our patrons? You will find the link below to our Patreon website.

All images and text Copyright © Colin McPherson 2021, all rights reserved. No unauthorised use permitted.