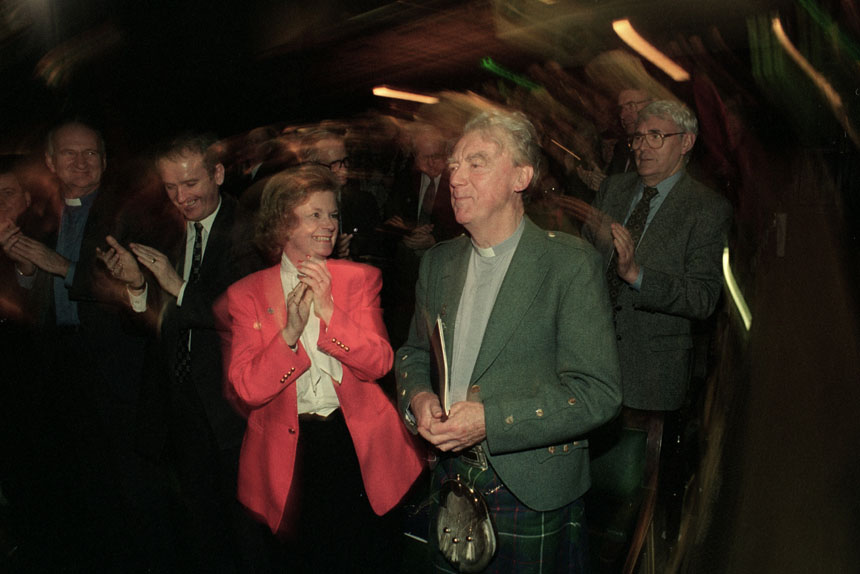 A week, as the old saying goes, is a long time in politics.

But how do we measure 18 years? On another of many historic days in modern Scottish politics, the government of our devolved parliament today launches its White Paper, setting out a prospectus for an independent Scotland. Spool back almost exactly 18 years ago to St. Andrew’s Day 1995, and we find another day which was a stepping stone to where we are today: the publication by the Scottish Constitutional Convention of a document entitled Scotland’s Parliament, Scotland’s Right at the Church of Scotland General Assembly building on the Mound in Edinburgh. 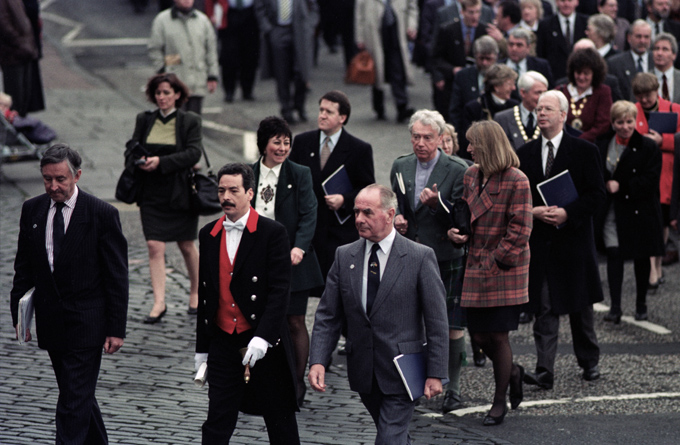 Scottish political and civic leaders arriving at the General Assembly of the Church of Scotland, 30th November 1995.
© Colin McPherson, all rights reserved.

The dramatis personae that day were very different to today’s protagonists and looking back, seem almost anachronistic and unbelievable: on the one side a Protestant minister, Canon Kenyon Wright, espousing home rule on the other a Conservative MP, Secretary of State Michael Forsyth, the Westminster government’s man in Scotland who was implacably opposed to the establishment of a devolved parliament in Edinburgh. 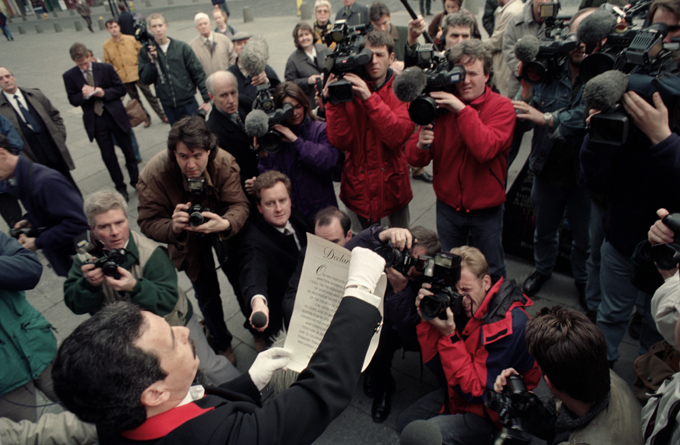 Reading the Declaration of Arbroath on the steps at the General Assembly of the Church of Scotland building.
© Colin McPherson, 1995, all rights reserved.

The day’s proceedings consisted of two events. Firstly, Secretary of State Forsyth, circling like a vulture in the grey, cold Edinburgh skies, popped up in front of the former Royal High School building – then slated as the location for the putative parliament – and warned all-and-sundry of the dangers and delusions behind devolution. 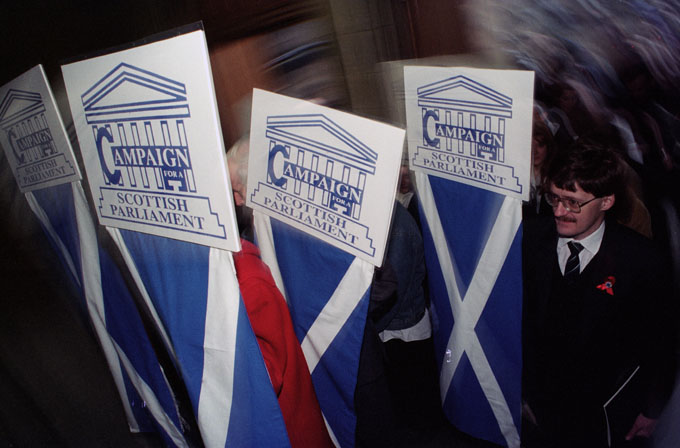 Campaigners with banners arriving at the General Assembly of the Church of Scotland building.
© Colin McPherson 1995, all rights reserved.

The main event, however, was the gathering on the Mound of the great-and-good of Scottish political and civic society, there to show solidarity with an idea which was growing in the public’s mind, and to sign the document which would underpin the campaign for the parliament to be reconvened for the first time since 1707. 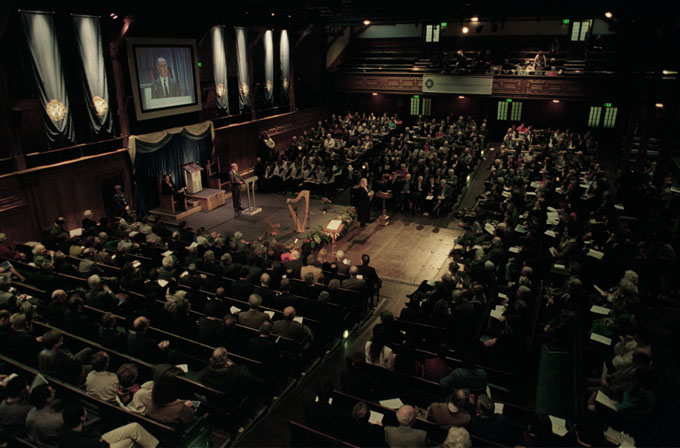 Campaigners seated within the main hall of the General Assembly of the Church of Scotland building.
© Colin McPherson 1995, all rights reserved.

With all the pomp and pageantry of a quasi-state occasion, it looked and felt like the Scottish Establishment were there en masse. But there were noticeable absentees: The Conservatives opposed it and the SNP abstained, angered by the lack of any mention of independence within the Convention. Nevertheless, up the delegates all trooped, dutifully signing a document which with eerie similarity to today’s publication was dubbed “a blueprint for Scottish devolution.” 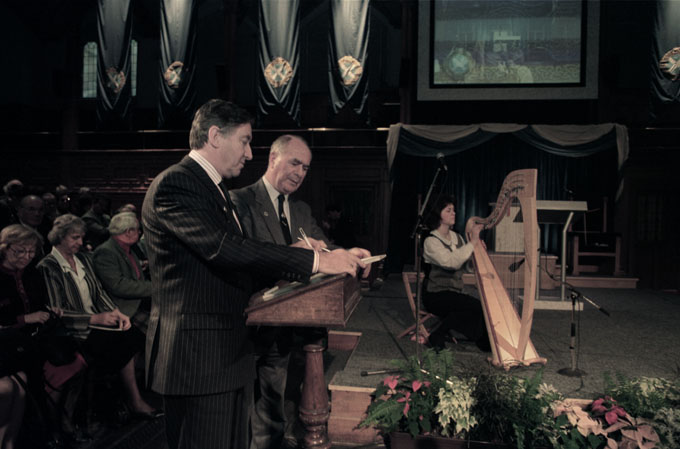 The rest, as we know, is history. Forsyth and the Tories were blown away in 1997 and within two years the parliament had sat for the first time at the General Assembly building. The final twist to the story for me that day drew on the lesson about “right time, right place.” I was covering the day’s events for the Independent, and in those days I would process my films and file my pictures from the Scotsman office, at that time a stone’s throw from the Mound. I happened to be on the editorial floor late in the afternoon when I overheard a discussion amongst senior editorial staff about which photograph the paper should run on the front page, an image which they hoped would sum up the occasion. 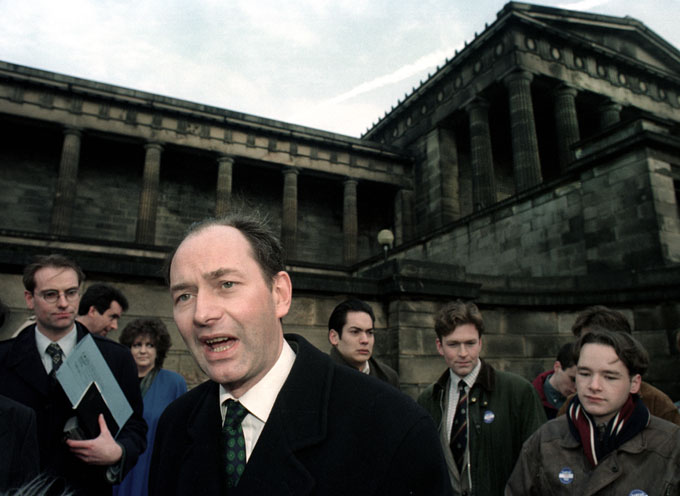 I had just wired all my photographs and the editor started talking loudly about the moment at the end of the signing ceremony when all those gathered had stood up and spontaneously started to applaud Canon Wright, the Convention’s figurehead and unifying force behind the campaign. The editor wondered if the Scotsman’s photographer had captured that moment. Unfortunately he hadn’t. I hadn’t thought much of that congratulatory moment, so had not sent the image to the Independent. Indeed I hadn’t even processed the roll of film which contained the photograph. Within the hour, the film was developed and a print made, which was then scanned and laid out on the page for first edition. And so, the following morning, I was proud to say it was my picture which had captured that historic day for Scotland in the Scotsman. (In case you are wondering, the Independent used the photograph of Michael Forsyth.) 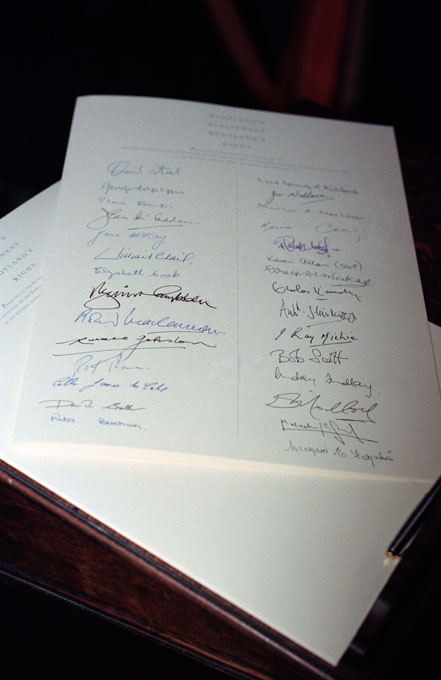