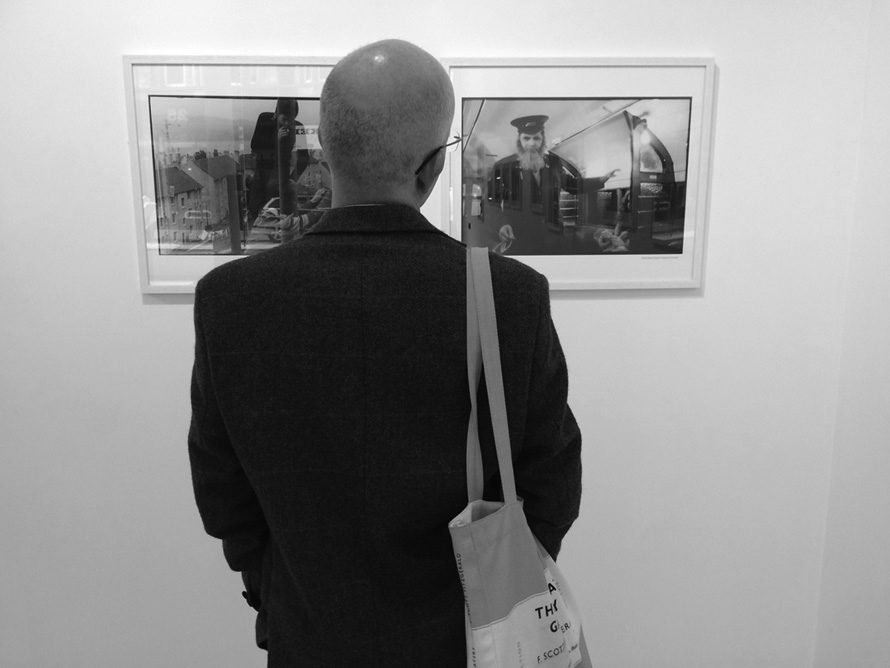 It would be easy to label Larry Herman’s work as ‘old school’.

His photography is indeed imbued with an aesthetic sense which resonates the past. Grainy, monochrome images which depict life at a time when Scotland’s Industrial Age was coming to an end and the new service economy and its illegitimate offspring, unemployment and job insecurity, had not yet pervaded everyday life. This would do an injustice to Herman’s work, however, the context of which is directly relevant to peoples’ lives today: our never-ending struggle for financial security and survival; the ceaseless toil of work; the quest to find justice in an increasingly unequal Britain.

Clydeside 1974-76 currently on show at Glasgow’s Street Level Photoworks, offers us a glimpse of a world which, in strict terms, no longer exists: The men in the blast furnace at the Ravenscraig steel mill, the workers dwarfed by ships under construction on the Clyde; a woman, head bowed in concentration, sewing pockets to garments in a factory in Campbeltown, of all places. These locations, once the lifeblood of countless Scottish communities, swept away in the Thatcherite firestorm, now consigned to memory and preserved in a thoughtful, honest and soulful manner by Larry Herman’s photographs. They are intimate moments which humanise industry.

The title of the show may be geographically misleading, but the sentiments and honesty behind the work endures and cuts through this narrow definition of the life and land surrounding Scotland’s most famous – and infamous – river. By including images from as far afield as rural Argyll and Ayrshire, we are allowed to spy different aspects of life and work in 1970s Scotland. The pictures do not romanticise working life in Scotland, often the curse of the commentariat which likes to hark back to some ‘golden age’ when the world was Clyde built (neglecting to observe that this was all done on the blood, sweat and tears of the working man and woman). At the same time, Herman’s images do not portray a negativity and grimness of the occasional visitor or voyeur. His was a project, constructed over two years, which allowed him the time and space to develop his themes and narrate carefully a political strand to his output which subtlety and successfully takes a stand.

If inequality is an oft-bandied word in today’s political lexicon, then some of Herman’s images in this show demonstrate starkly that it has always existed. The photograph of the fatted, ruddy country squires sits uneasily with a picture of family life in the vast, sprawling streets-in-the-sky of Glasgow’s Red Row flats. It is classic epic and everyday, woven together by a determinedly singular vision of the world, which has sustained a passion and fire in Herman’s work until this day, where he still shoots stories and projects with those same political themes at their core.

We emerge from the gallery, blinking in the early-October sunshine as people of all races, cultures and backgrounds colourfully tumble down Argyle Street, shopping bags swinging, music blaring. I remind myself that so much has changed for the better in this city and the regions surrounding it in the past 40 years, but at the same time, so much has remained the same.

Larry Herman’s photographs are a reminder that photography can still prick our conscience and be a call to action, even after all these years. It is a timely rejoinder to anyone who thinks ‘old school’ is dated and irrelevant in the digital age.

Clydeside 1974-76 by Larry Herman continues at Street Level Photoworks until 27th November, 2016. There will be a Q&A event with Larry Herman, Noni Stacey and gallery director Malcolm Dickson on Saturday 22nd October at 3pm, which is free to attend.