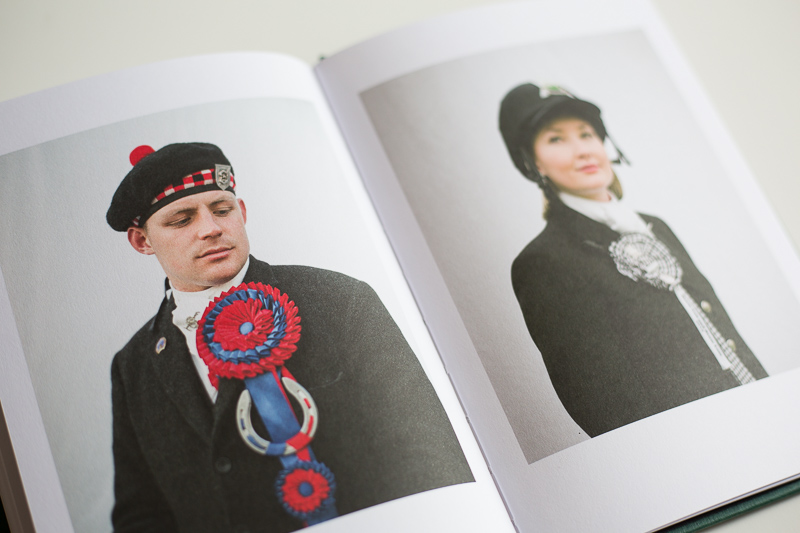 To coincide with our new exhibition, ‘The Ties That Bind‘, on now at the Scottish National Portrait Gallery, Edinburgh, until April 2016, Jeremy has published a book of his work,  ‘Unsullied And Untarnished’, portraying the Common Riding festivals of the Scottish Borders. The same work forms Jeremy’s contribution to our SNPG show.

‘Unsullied And Untarnished’ is photographic portrait of the people of the towns of the Scottish Borders who each year undertake the maintaining of tradition, commemorating their local history and at the same time strengthening the bonds of their communities looking forwards, during the annual Common Riding festivals of the summer months.

Braw Lassies and Honest Lads, Left Hand Lassies and Right Hand Men, Cornets, Hunters and Coldstreamers – all titles given to the upstanding youths who lead the festivities, and whose duty it is to carry the burgh or town standard around the common lands, and to “bring it back unsullied and untarnished”.

To accompany the 58 photographs Document Scotland’s Honorary Patron the Glasgow-born photojournalist Harry Benson has written a foreword, and Alex Massie, Scotland editor of The Spectator, has written a beautiful essay which explains the Common Riding festivals, and what they mean to the participants and communities involved.

“Some of these ridings and festivals are ancient, stretching back five centuries and more. Others are more modern but, whatever their roots and antiquity, they have something in common. They are annual gatherings of remembrance and celebration; affirmations that though these may be small places there is nothing small about coming from Kelso or Galashiels, Lauder or Langholm.” – Excerpt from essay, ‘Unsullied And Untarnished’, by Alex Massie.

“These festivals are not flashy, for the Border towns are not flashy places….They are an argument for the small places – none of the Border towns, not even Galashiels and Hawick can count as metropolises – and the importance and permanence of place. They maintain the golden threads that stretch back through the ages to a time when the world was a younger place. These festivals are the guardians and custodians of memory and without memory, what does identity matter?” –  Excerpt from essay, ‘Unsullied And Untarnished’, by Alex Massie.

We were fortunate that during the opening night of our show in the Scottish National Portrait Gallery that two of Jeremy’s collaborators from the project made it along to see their portraits hanging on the wall of the show, which has been curated by Anne Lyden, the National Galleries’ International Curator for Photography.

Calum Moffat (above) made the journey from Jedburgh along with his family, and the next day was going to be presenting at his school a little talk on the project and the fact that his portrait made it to the gallery wall. Graham Hamilton (below), the ‘Braw Lad’ of Galashiels in 1989, kindly made it along also, standing by his portrait.

“Every Common Riding is unique yet, in this important respect, each is just the same as last year’s festivities. These are the permanent things; the ties that bind a people together, that insist upon the specialness of a particular small patch of Scotland. They are the things that make a difference, the things that matter most.

And if you listen carefully you will still hear the hoofbeats of history commanding us to remember and celebrate who we are and whence we have come.” – Excerpt from essay, ‘Unsullied And Untarnished’, by Alex Massie.

The book is available to purchase directly from Jeremy’s website.