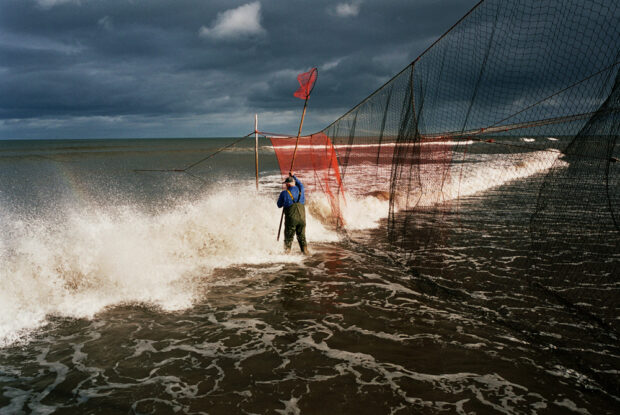 We all get 15 minutes of fame, so the story goes. To stretch the Warholian reference, in 2005 I got the best part of half-an-hour starring on prime time television. Not strictly true, I admit. It was my photography and the subject of my work which captured the attention of the nation. I was merely a narrator. A walk-on part in my own story. I was reminded of this episode in my career as the short film was first broadcast exactly seven years ago today and featured my work with Scotland’s last salmon net fishermen, a project which had already been ongoing for around a decade.

Entitled ‘Catching the Tide’ and commissioned by Scottish Television and Grampian Television, it allowed me to introduce my work and two of the pivotal figures in the salmon netting community with whom I had formed a strong bond and collaborated with over the years. The film was a family affair: directed by my sister Katrina McPherson and edited by her husband Simon Fildes. Filmed beautifully by cameraman Neville Kidd, the documentary managed to capture the ever-changing weather, dramatic scenery and the perseverance and effort required by the fishermen. Having worked with the whole crew and production team previously as a stills photographer on a number of projects, I felt completely at ease during the filming, even managing to keep seasickness at bay during a stormy afternoon at the bag nets off Auchmithie.

I’ve no idea what the viewing figures were like, but I did get a lot of feedback about the film and the photography. Most was positive; some was negative; a couple of letters were threatening. I knew I was tackling a very sensitive story with the film. The salmon netsmen have many enemies, particularly within the powerful angling fraternity. Those critics didn’t like the slant of the content. My view was that my work was ventilating a particular point-of-view. Anyone can disagree with or criticise that perspective. That is their right. I felt strongly that it was story which had to be told.

The film went on to be repeated on terrestrial television and has been shown subsequently at a number of film festivals across the world, including the Tehran Film Festival, which threw up the tantilising prospect of my words being dubbed into Persian!

For me, it was an interesting way to diversify the direction of a project which was very close to my heart and which I had been associated with for many years. It showed just how a project can change direction and mutate during its lifetime. And it gave me my 24 minutes of fame.

To view the whole film on the internet, or to buy a DVD copy, please visit: http://www.left-luggage.co.uk/catchingthetide.com/Movie.html