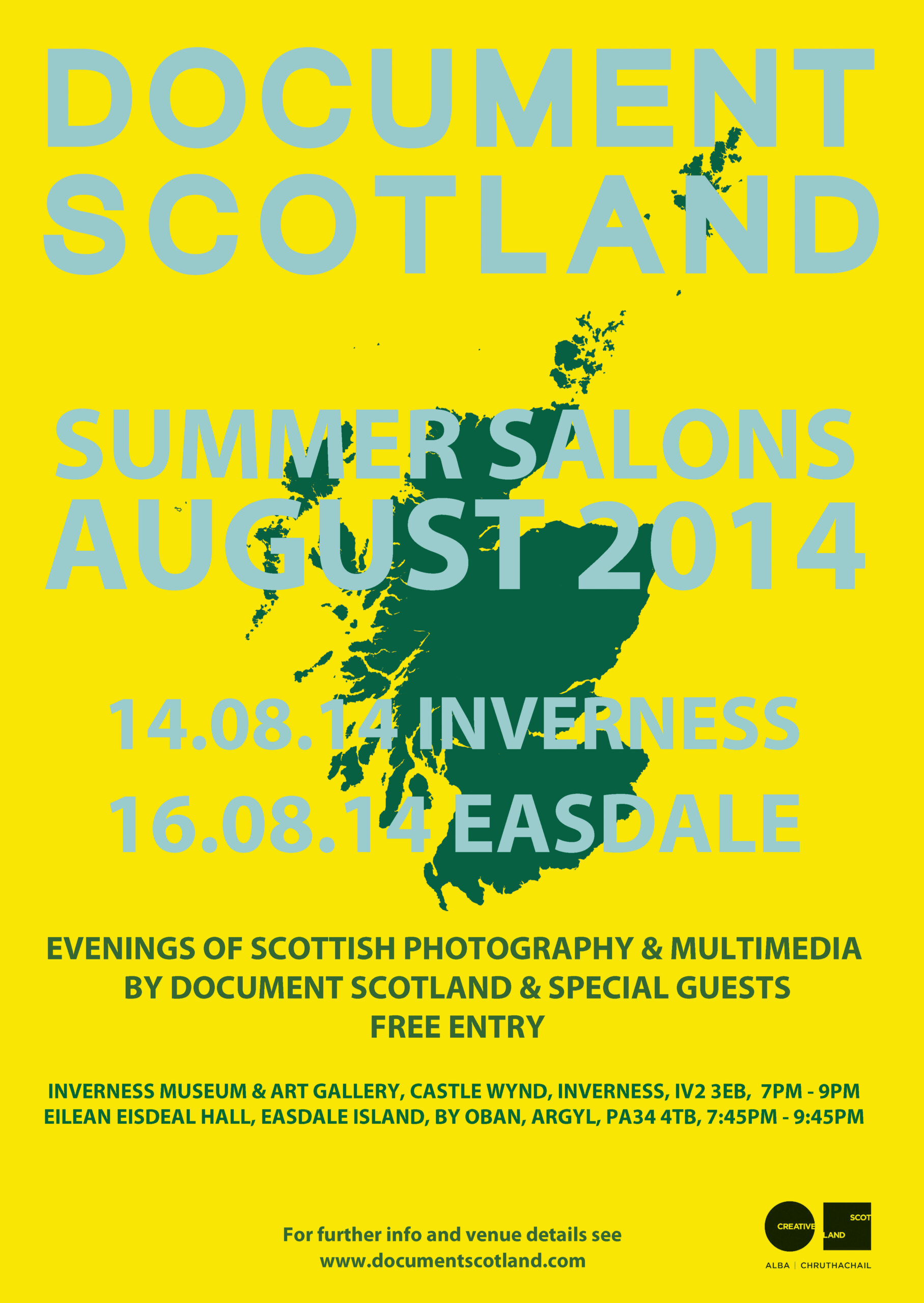 Document Scotland are hitting the road next month.

We are heading to the Highlands and Argyll to host the first of a series of four salon events across the country which will present the work we will be showing at our forthcoming exhibition at Street Level Photoworks in Glasgow. There will be presentations in person by Jeremy Sutton-Hibbert, Sophie Gerrard and Colin McPherson. In addition, we’ll be looking at Scotland’s historical legacy by highlighting the work of one of our partner organisations, the University of St. Andrews Library’s photography collection. We’ll also be showcasing work by contemporary photographers making work about Scotland and discussing the current state of photography.

The first event will be staged at Inverness Museum and Art Gallery on Thursday, 14th August. The event runs from 7-9pm and we are looking forward to presenting work for the first time in the Highland capital. Due to the size of the venue, booking is essential: To reserve you place, please telephone the museum on 01463 237114 or email

Two days later, on Saturday 16th August, the Document Scotland tour takes to the ocean waves, with a three-minute ferry crossing to the small car-free Hebridean island of Easdale, just south of Oban. We are being hosted by Eilean Eisdeal at the Easdale Island Community Hall, a popular and lively venue for all types of arts activities. Our event begins at 7.45pm to accommodate people who may wish to cross over on the ferry from the mainland at 7.30pm. There will be ferries back at the conclusion of the evening’s entertainment.

Both events will as usual be informal, informative and interesting – and free to attend. We hope you can join us in either Inverness or Easdale, please spread the word or get in touch for further information.

There will be two further salon evening to be staged in St. Andrews and Edinburgh in the autumn. Details to follow. 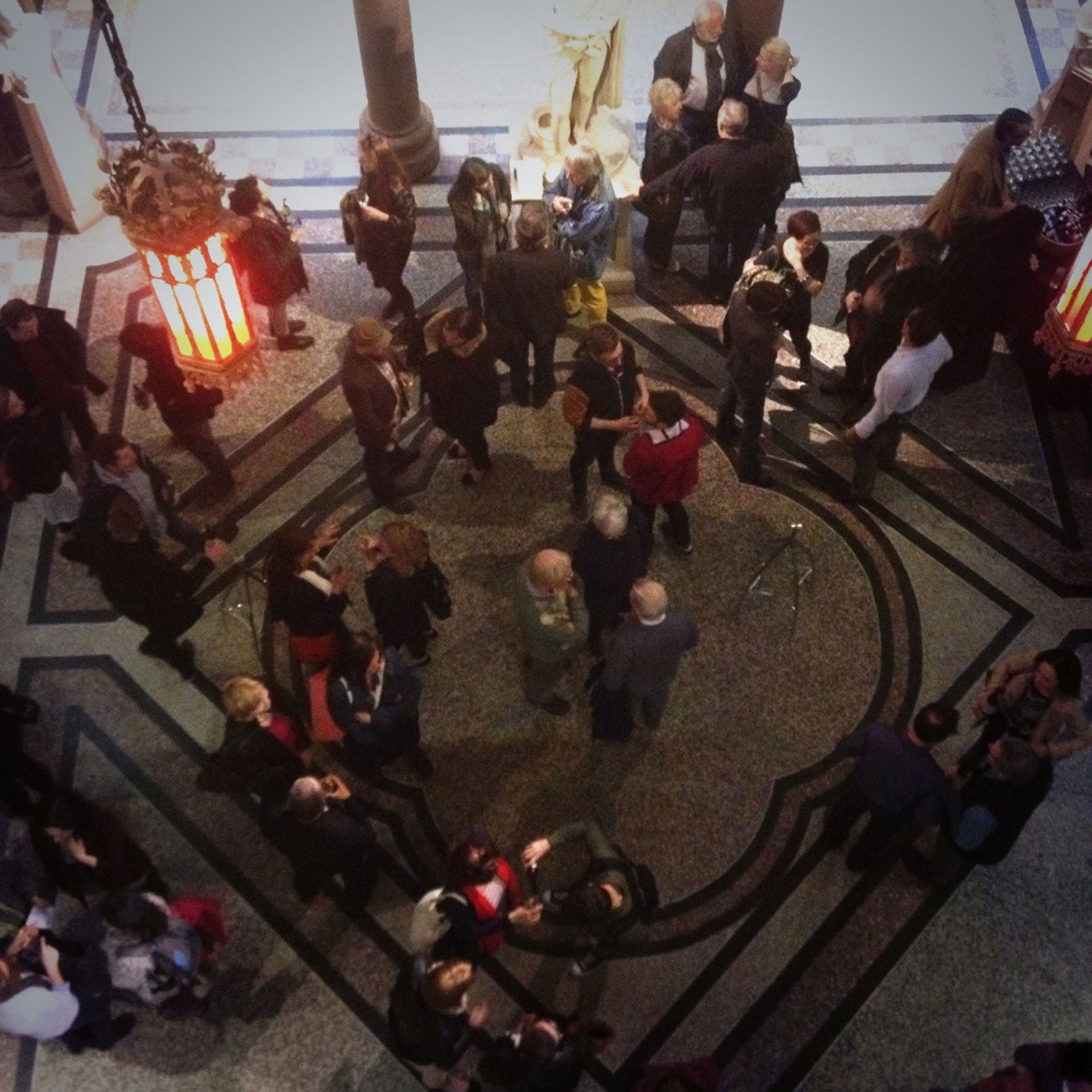 A night at The Scottish National Portrait Gallery

We are still buzzing after such an interesting, creative and energetic evening at The Scottish National Portrait Gallery last night for Document Scotland’s 1st ever portrait event “Face To Face: The Portrait in Photography Today”.

Thank you to the photographers which Document Scotland invited to take part along side us, Ben Roberts, Arpita Shah, Emily Macinnes and Graham MacIndoe. Thank you to Annie Lyden, the International Curator of Photography at The Scottish National Portrait Gallery, and her brilliant team for chairing and organising the event with us. Thank you to you the audience for coming along, for sending us your support from a distance if you were unable to make it, for following the events on Twitter, for being there, for helping to spread the word, for making it such a success and for your support of Document Scotland on our (relatively short but eventful) journey so far.

Here’s some images from the night, if any of you have any others which you’d like to share with us please do send them in – we’d love to see them.

The evening started off with Document Scotland’s Sophie Gerrard who showed new work, made over the last 18 months during Sophie’s return to Scotland. Sophie talked about re-aquainting herself with Scotland through portraiture – and spoke of the collaboration between sitter and photographer when making a portrait.

Then we heard from Jeremy who talked us through his Roma portraits, his experiences of living and visiting the camps and later houses of those featured in the project, some individuals he met and re-photographed almost 10 years later. Jeremy also showed a short piece of film footage of him in the camp making his portraits.

Next up was Ben Roberts, who started by talking about some his influences, Chris Killip & Laura Pannack and then showed us images from the series ‘Higher Lands’, which Document Scotland featured as a portfolio on the website last year. He talked about his photographic process and approach to making the portraits and also about why they have remained such a popular body of work, raising the question that perhaps we all see a little of ourselves in these portraits.

After Ben we watched a moving piece of multimedia by Graham MacIndoe documenting his journey through heroin and crack cocaine addiction. Graham’s images have been featured in The Guardian and other press lately and his decision to release such a personal body of work was something he talked about in the multimedia presentation he made for the evening.

After the break first up was Colin McPherson with a lighter hearted look at his portraiture taken mostly from his 1 year journey along the border of Scotland with England. His presentation showed people he’d encountered along the way and those who had become part of the journey but who, in his words, remained strangers. He titled the collection “In the Company of Strangers”

Then we heard from Arpita Shah who took us through a several bodies of her work, and talked about the relationship between mythology and portraiture and how she uses it to explore the experience of Diaspora for Asians living in Scotland.

Then it was Emily Macinnes who showed, for the 1st time her project “Paradise Lost: Testimonies of Abuse”, a powerful presentation of images and text documenting the thoughts and experiences of men who have suffered sexual abuse. A powerful and moving piece.

Last, to finish the night was  Stephen McLaren’s work who’s series of portraits of Americans in California was introduced by Annie Lyden and left us all with the sound of bagpipes in our ears – and a smile on our faces.

Document Scotland are very happy to have been invited to host ‘Face To Face: The Portrait in Photography Today‘  an evening of portraiture, conversation and photography  on Wednesday 14th May at The Scottish National Portrait Gallery.

You can expect a lively evening featuring work by the four members of Document Scotland as well as special guest photographers; Arpita Shah, Ben Roberts, Graham MacIndoe and Emily MacInnes. The evening will be chaired by Annie Lyden, International Photography Curator at The National Galleries of Scotland.

Doors open at 7pm, allowing you a chance to look around The Taylor Wessing Photographic Portrait Prize 2013 before proceedings begin at 7:30pm.

and we look forward to seeing you! 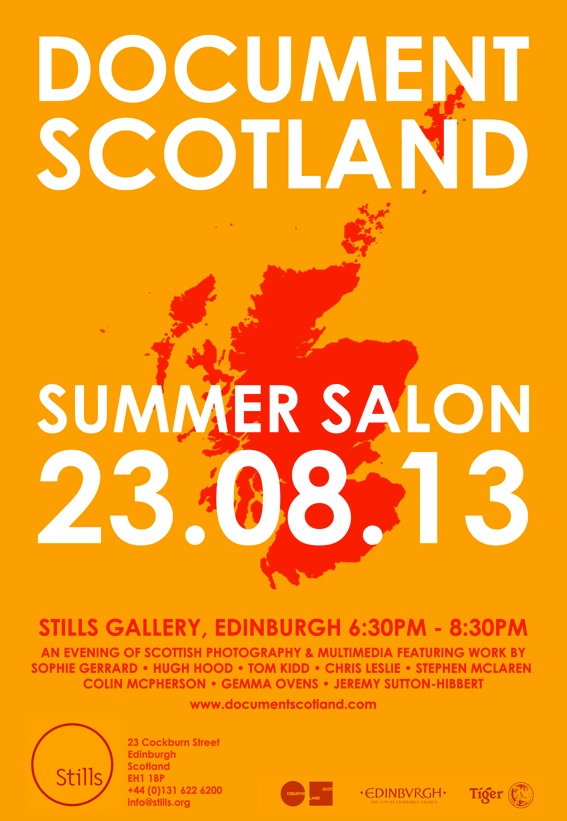 Well friends, autumn approaches, but never let it be said that Document Scotland gives in so easily. We’ve decided to have a summer party. Or to give it a grand name, we’re having a Summer Salon.

Yep, on Friday August 23rd, during the Edinburgh festival, we’re having a Salon evening event to showcase Scottish photography and multimedia, to get people together and to toast the good times of summer. The event will be held at Stills Gallery, Cockburn Street, Edinburgh, from 6.30pm-8.30pm. And apparently we have to be out the door sharp from the Gallery, but there is a hostelry next door that we can relax in and continue our discussions.

Showing multi-media stills photography work on the evening, covering a variety of topics, will be Gemma Ovens, Chris Leslie, Colin McPherson, Jeremy Sutton-Hibbert, Sophie Gerrard, Tom Kidd and Hugh Hood. There will also be book stall with some latest book titles, with our good friend Neil from Beyond Words. Stephen McLaren is flying in from California to be our MC for the evening.

Due to capacity limitations at Stills we are only allowed to admit 50 people maximum, and already approximately half that number is accounted for, so we’re opening out an invite to 20 more other souls who’d like to join us.

If you would like to attend, and please remember attendance will be limited, email your name and details to , he is the bouncer, the man with the Guest List. And please, we’re sorry, but only email if you will definitely come, space is limited unfortunately, as much as we’d love to have an open door for everyone.

We hope you can make it, and we look forward to the chat.