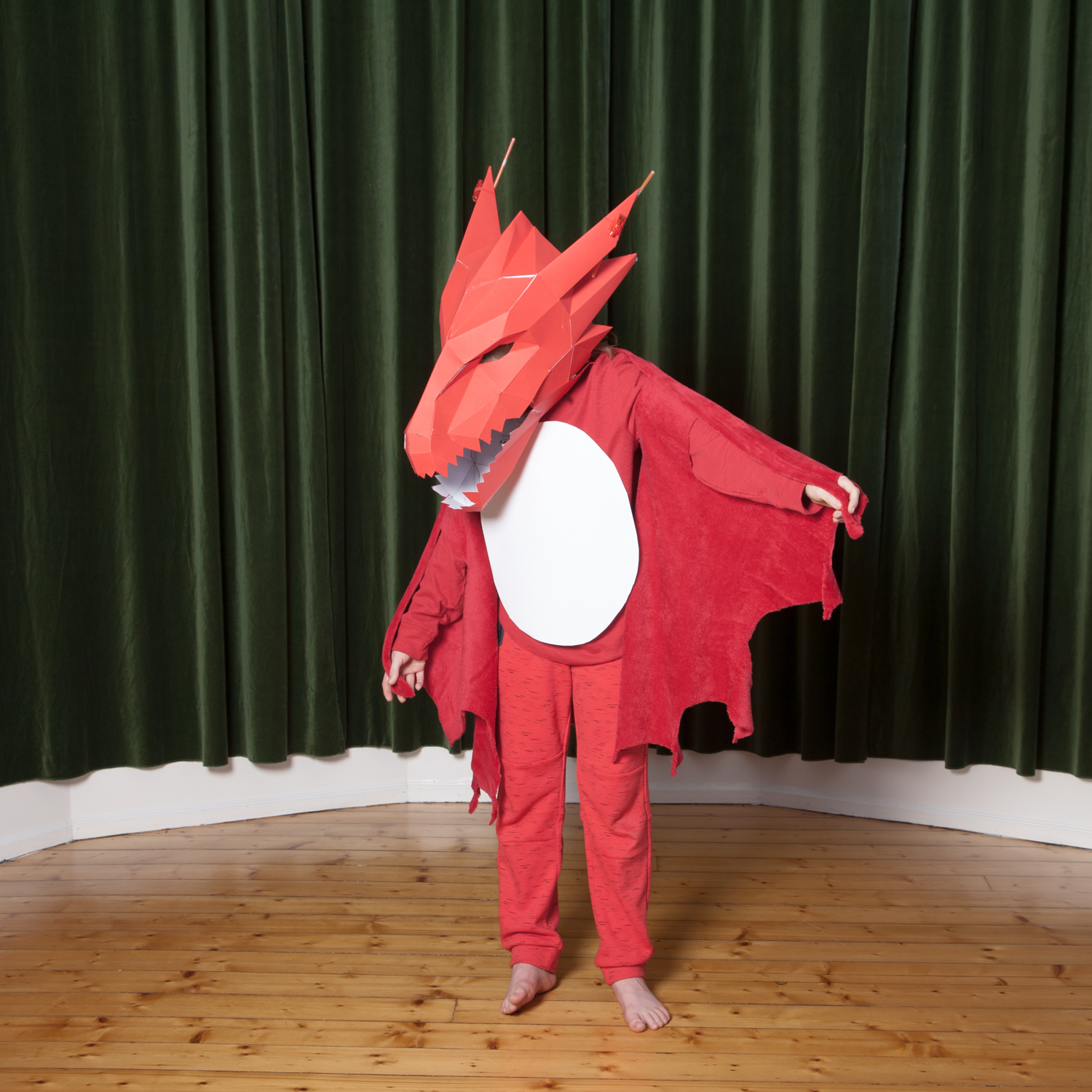 The Guisers by Margaret Mitchell

Over three Halloweens (2015-7), Margaret Mitchell photographed children who visited her home as Guisers. Their highly individual costumes displayed not only their originality but also conveyed aspects of the inner world of the child. Sophie spoke with Margaret about the project and took a look through the newspaper that Margaret has published in time for Halloween.

DS: We enjoy your work at Document Scotland, Stephen wrote about your projects ‘Family’ and ‘In This Place’ for the Document Scotland site in 2017. Your portraiture and long term projects feature children frequently, how did this project get started?

MM: All my photography is generally concerned with the intricacies and complexities of people and their lives. Other work has looked at issues around family, childhood, social geography and equality, of people and their lived experiences – all stories of people basically. This work presents a particular childhood experience within a centuries old tradition that continues to be practiced in Scotland.  Through the tradition of guising at Halloween and the costumes– the disguises – worn by over 60 guisers, we are given an insight into a child’s world and also a document of a time.

‘The Guisers’ started out back in 2015 as a reaction to what I observed as a parent living in a community where the tradition of guising is very strong in childrens’ lives here in Glasgow. I realised some people in the UK believed Halloween to be a recent American import which surprised me as I went guising as a child in the 70’s and my son continues to do so. Guising has been a tradition in Scotland and parts of the UK and Ireland for hundreds of years with its roots suggested to be in the Celtic Samhain festival. It was taken to America by emigrants from these various Celtic origins and added to other cultural influences to become the American trick-or-treat.

So this brings us back to nowadays and what contemporary children are doing in Scotland. What the tradition of guising and visiting neighbours’ houses means and within that what they choose, plan (often weeks in advance) and then create, to disguise themselves as and then perform a ‘party piece’ just as I did as a child. So I decided to start documenting this important and intriguing tradition but also to provide an insight into a child’s world through their costume, and within that, their fantasy and play choices.

DS: Guisers are a familiar site at Halloween in Scotland, and as a child I remember dressing up and going around the neighbourhood. The scale of this project though seems quite incredible to me – there are so many, who are all these characters?

MM: In my community there is a strong tradition of guising and we get an abundance of visitors every year – last year alone I counted over 80 guisers. I am sure it is different for different areas even within this city. When my son was younger, I would host Halloween parties and as he got older, guising itself took over. But it’s significant to remember that this is local children who are visiting our home, children whose parents you know or whom you know through friends of friends, who come as a group, or with parents and this is a sense of celebration, of excitement and of a community sharing. The photos only represent a relatively small number of the guisers who visit because I cannot take photographs and also listen to their songs and dances and jokes, manage apple-dooking and also do a photo. Some children visit me between school getting out – where they go dressed up for Halloween and celebrate during the day – and them starting guising proper at about 6 pm. Other children are photographed during guising itself when they come in, do their joke, dance or song and then do a photograph.  Someone called it my ‘Guisers Studio’ and I like that idea, that these children in that time of being in that emotional space in their mind, pop in and get their portrait taken. This day that becomes an exciting and celebratory evening during a distinct and important childhood experience. As mentioned, I know these children or they come with parents, friends, and friends of friends, so their participation is often spontaneous.

DS: The expressions suggest a pride in their costumes, and a seriousness – how do they behave during the portraits, what’s the exchange between you like, any funny stories?

MM: I wouldn’t say anything particularly funny happens as the children are really quite serious in both the costumes they choose and also in the party piece they choose to perform. It is something they often plan a long time in advance – parents have even told me what their child starts planning just after Christmas is over! So very obviously, it is a major event in some children’s lives, greatly loved by them and with a lot of significance.

When children visited, I would ask about their costumes and why they chose that particular disguise. The reasons can be incredibly detailed and complex and through this, little insights are given into how a child is thinking when they choose to dress as they do. For example, some want to be creepy, they want to adhere to this idea of a ‘spooky’ Halloween and within that confronting darker undertones of life.

Others become more intricate, more abstract and subsequently more revealing in their reasoning. Some of this is evident in their appearance, added to by some information they shared with me when asked. One child told me he was a ‘Victorian Gentleman’ because he liked to speak 18th Century English. I find this fascinating that these interior worlds of a child’s play are then presented on this evening of guising. Another told me he was ‘Untitled’ when I asked who he was which I thought was intriguing as he looked like he had been in an accident. Most of the costumes are home-made, mash ups of fantasy play. Some are as expected: the zombie, the witch, the movie characters. Others are slightly darker, more invented, something that tends to appear as the children become a little older and inventing more, not reproducing certain common strands.

We have to remember too though that we are looking at these photographs through adult eyes, perhaps taking our own knowledge and experience of the world and laying those onto these children when it may not be the correct interpretation. I try to remain mindful of that but at the same time I believe some costumes are incredibly revealing into these childhood worlds, into a world of play, of fantasy, and for some, the consolidation of the darker elements in life.

DS: I agree, it’s fascinating, especially seeing them in such a huge number, to interpret the images and their underlying narrative, what do you feel the project communicates in a wider context, what do you see here?

MM: Essentially, this work looks at the complexity of being a child as presented through their chosen costume – their disguise – at Halloween. In a wider framework this is a portrait of these children at this specific time, within this ongoing tradition in Scotland. It presents not only the varied disguises they are choosing and making (often with the parents’ help of course) but also offers us the viewer a little entry point into their world and their minds; to their experiences of being a child –  a guiser – in Glasgow, in Scotland in our present time. They are continuing this tradition that I myself did and all those who preceded through the years of guising and making lanterns from turnips, visiting their neighbours and performing for some nuts, sweeties and fruit in return. It is very much about community, about sharing. It is also about the experience of childhood and confronting darker elements and dealing with them. It is interesting that some children chose not to deal with or confront the ‘scary’. For example, one boy dressed as a footballer (‘I had a beard but it washed off’) because he does not like ‘scary stuff’. Another younger child also dressed as a footballer but had blood running down his legs in zombie mode. A good amount of these costumes are not based on anything factual or character-based but are invented by the wearer. There is a unicorn (two children inside) who I know walked to school and home again dressed as this fantastic unicorn. They told me they dressed as such so that if people got scared at Halloween, they might be happy when they saw them. A lot of thought and reasoning goes into this one night. A lot of childhood experience.

DS: Are planning to continue? This year will there be a queue of 50 guisers outside your door whilst you lie on the floor with the lights off?

MM: Haha well, I am not sure. I didn’t think I would last year and then I set up my ‘Guisers Studio’ at the last minute. So yes, perhaps I will. It usually comes from children and parents asking me so we will see. My son is getting older but he is still guising at least for one or two more years. Children in the project range from about 3 up to about 14, so there comes a time, a cut off, when they no longer want to go out guising.

To accompany this series Margaret has made a publication of all 60 guisers from the past 3 years that she photographed. All those involved will receive a free copy as a way of thanks for being involved and as a keepsake for this time in their lives, for their creativity and their intriguing presentation of being a child at Halloween.

Copies are available to purchase through Street Level Photoworks and online from Margaret at the links below.