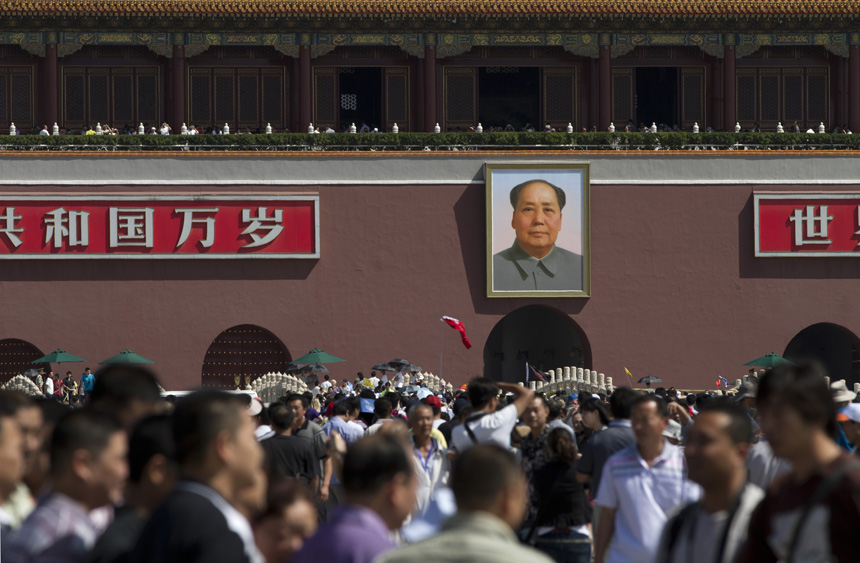 Our friends over at Allmediascotland have run a nice wee feature on Document Scotland. It tells the story of how it all began: in a lakeside bar in downtown Beijing. Read on…. 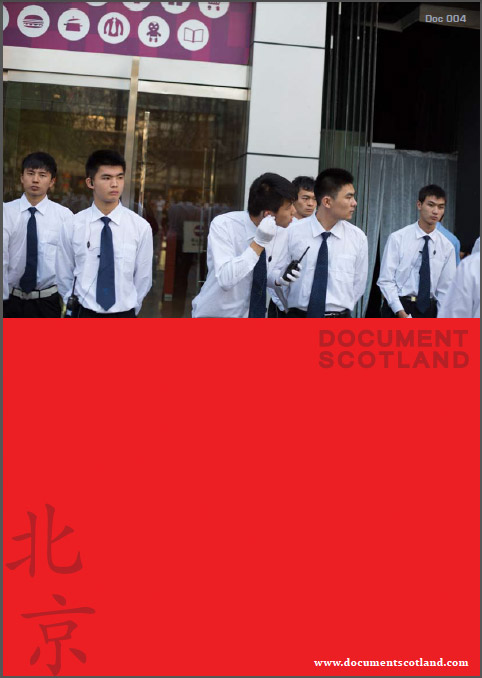 To celebrate the Chinese New Year we’ve decided to make a small compendium of photographs taken by the four of us, Sophie, Colin, Stephen, and Jeremy, in Beijing over the past two years. You can download, free of charge, the pdf of work via the following link. Download ‘DOC004: Document Scotland in Beijing’ here.

Document Scotland has an affinity for Beijing, and in particular for a bar near the HouHai Lake, as that, incredible though it may be, is where the idea for the forming of our collective was first voiced in 2012. As the lights revolved, and the karaoke croaked, Jeremy and Colin discussed the idea over a Tsingtao beer. The following day the idea was put to Stephen who was also in Beijing, working on the same project as Colin and Jeremy, and all of a sudden Document Scotland had three members. Sophie joined the collective a little while later, once the idea had progressed from a discussion to actually being a website and a plan.

In 2013 Sophie, Colin and Jeremy once again returned to Beijing to photograph in the streets, as part of the Vision Beijing project which brought 50 world photographers to the capital to shoot for one week.

The work you see in this little pdf  comes from both the 2012 and 2013 trips, and features work by all four members of Document Scotland. We hope you can download it and enjoy it today, the day of the Chinese New Year. 新年快乐. 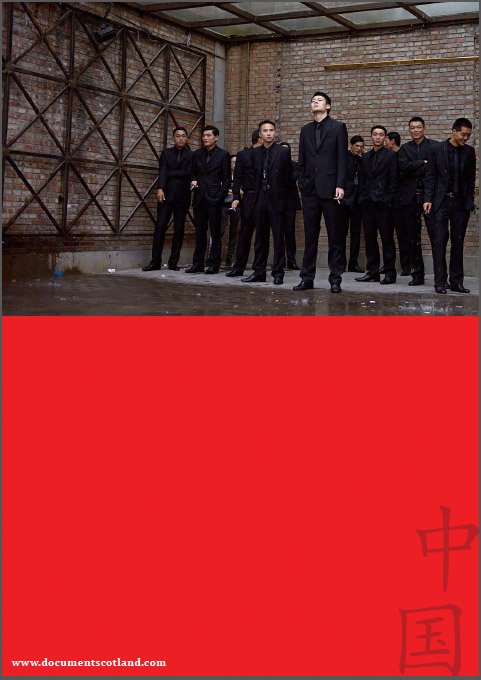 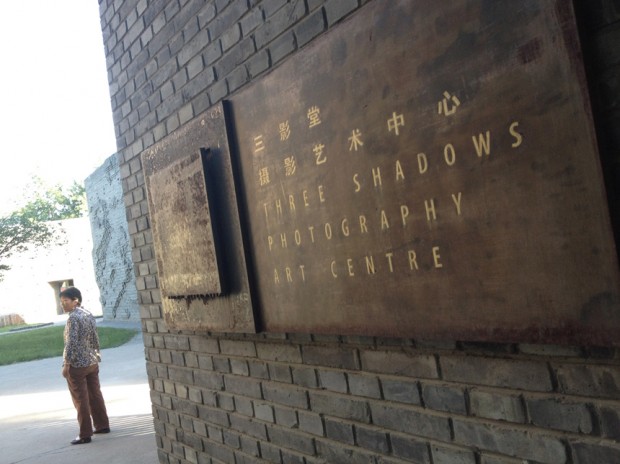 It’s always nice to go back to where things begun.

One year ago, Document Scotland was conceived in Beijing and born in Scotland. When Colin, Jeremy and Stephen travelled to China last year on assignment together, little did they think they would come back as a collective. One of the pivotal moments of the visit was attending a lecture by Street Level Photoworks director Malcolm Dickson, who talked of the historical importance and legacy of Scottish documentary photography to an audience at the acclaimed Three Shadows Photography Art Centre in Beijing. The conversations which emanated from that event led us to the conclusion that Scotland, standing at an historic crossroads, needed to be photographed and documented in an organised and determined way to leave a lasting legacy of these momentous times. 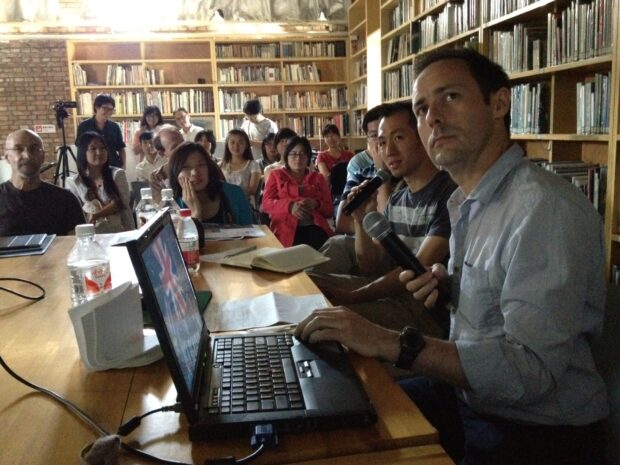 Fast forward one year and we are back at the 3 Shadows. This time by invitation from the centre’s director Rong Rong, to update the audience of our progress in the first year. Minus Stephen, but plus Sophie, we staged an event which showcased not only our own collective work, but set our photography in the context of the wider work being undertaken by photographers across Scotland at this present time. The talk was well attended and went on long past the scheduled finish time as we fielded questions on everything from the plight of the wild Atlantic salmon, the contrasts between land grabbing in Aberdeenshire and China and the prospects of Rangers joining the English Premier League. 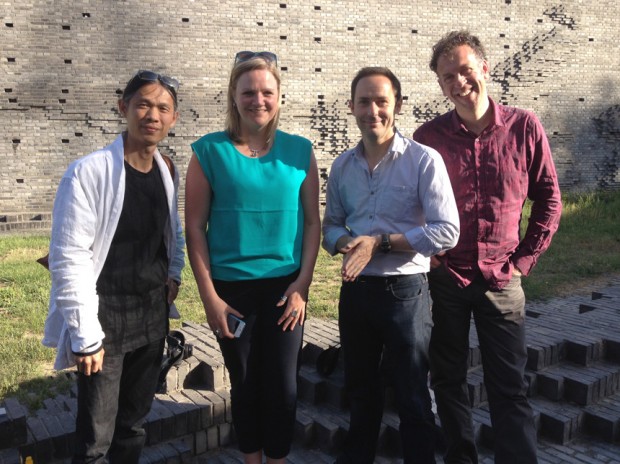 It was a privilege to be afforded the opportunity to talk to people in China directly about our work and what we are aiming to achieve through Document Scotland. We were even able to prove the link between our two countries by talking about the pioneering Scottish photographer John Thomson and his groundbreaking work in China in the 1870s. It was a fitting way to cement a relationship with Three Shadows which we hope to build on in the future. Many thanks to everyone at the gallery for staging such an enjoyable event.

Colin McPherson, Jeremy Sutton-Hibbert and Sophie Gerrard of Document Scotland, will soon be in China photographing on assignment and whilst there have the pleasure of presenting Scottish documentary photography to a wider audience by holding a talk at the Three Shadows Photography Art Centre in Beijing, on May 29th.

The talk will present the work of Document Scotland, the work of the photographers involved in the forthcoming ‘Seeing Ourselves’ exhibition, and also the rich heritage of Scottish documentary photography that came before, including John Thomson who of course travelled in China.

Talk details are as follows, and it is a free event:
Three Shadows Library
No. 155A Caochangdi,
Chaoyang district,
Beijing 100015, China. 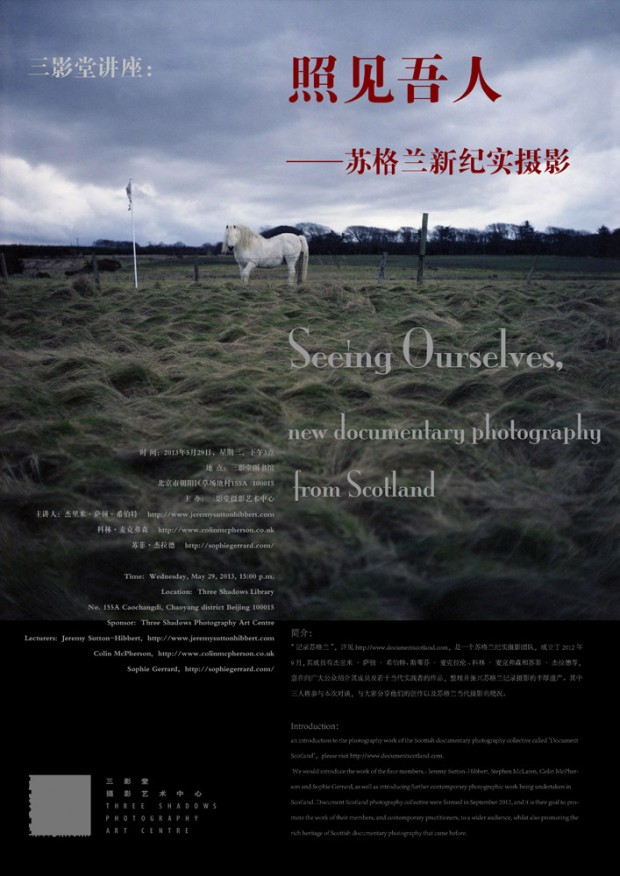 Document Scotland would like to thank Three Shadows Photography Gallery for this opportunity.

We hope to see you there!

In June of this year the Document Scotland photographers were invited by the Beijing Municipality Government to be part of their ‘World Photographers Focusing on Beijing’ project. Each year since 1999 this project has  taken place with 10 photographers from across the globe being invited to participate, to visit Beijing, to photograph and capturing their own viewpoints of the ever-changing megalopolis.

The resulting images, some of which you see here, more can be seen in the Portfolio section of this website, were exhibited at the Barbican Centre, in London, UK, during the 2012 Beijing Culture Week, which coincided with the London Olympics. 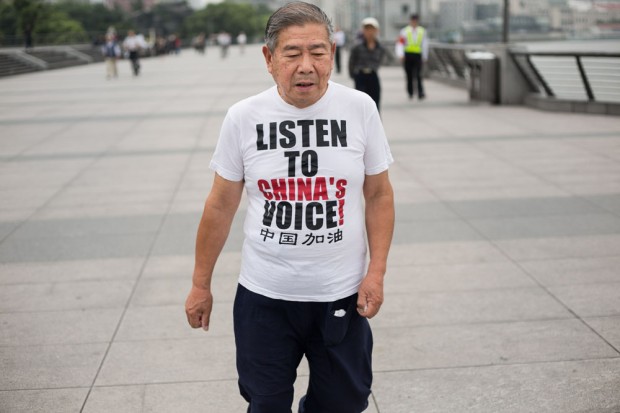 “To this first-time visitor, Beijing with its six ring-roads, twenty-million souls and shiny-new skyline was hard to work out. Taxi drivers needed maps printed for them and tube trains journeys could take over an hour to span the city, but thankfully having a camera helps make sense of this mega-city. Contrary to what I expected people were not suspicious of a tall white foreigner with a lump of expensive Japanese camera gear round his neck. All roads, streets and un-promising alley-ways were open to an inquisitive walker and only once was I asked not to take a picture. Contradictions abound in this epic urban phenomenon and I hope I managed to show some of that in the pictures I returned with.” – Stephen McLaren. 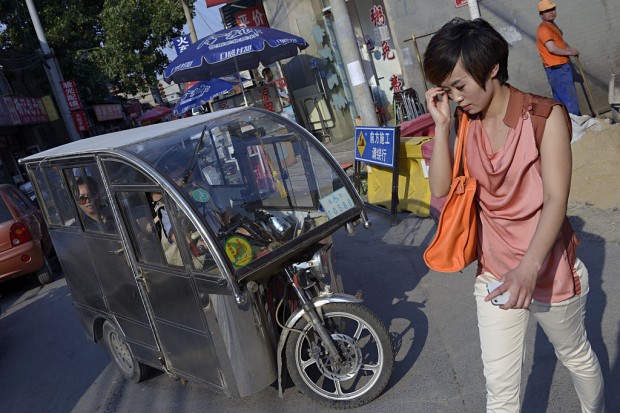 A group of tourists standing in line outside the Forbidden City.
Photograph © Colin McPherson, 2012, all rights reserved

“This was my first visit to China, a country which I had heard much about, but knew little of. The images I had in my mind of China, its history and its place in the modern world, were monochrome or cliched. What confronted me in metropolitan Beijing inhabited a completely different realm. I was fascinated by the Chinese people’s love for their land, their devotion to their culture and their passion for the historic buildings and sites of worship and conquest. They flock in their hundreds of thousands to visit the great edifices of the Chinese empire past and present. And where half a century ago they might have stood in Tiananmen Square in green khaki and Mao hats, today they sport the paraphernalia of the international tourist, hungrily buying up souvenirs and taking gigabytes of photographs. This is what I saw them seeing.” –  Colin McPherson.